Steve Jobs and his black turtleneck, blue jeans and sneakers have become a bit of a meme these days. We’re racking our brains right now, and we can’t actually remember a public appearance from the Apple CEO and co-founder where he hasn’t been wearing his trademark outfit. 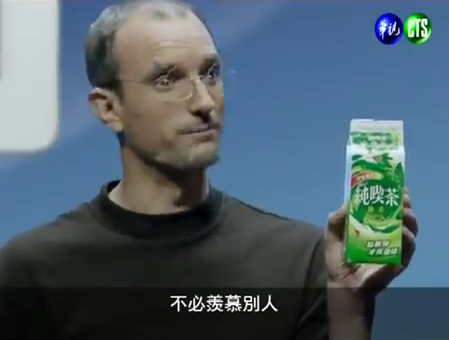 Jobs and his attire are so popular, that one Chinese firm has filmed a spoof Apple keynote in order to publicize their product and accompanying an iPad 2 giveaway.

What is the product, we hear you ask? Chinese tea.

We’re not making this stuff up!

Unsurprisingly Google has been busy pulling the ad from YouTube all day, but we’ve managed to find one that’s still alive and kicking – at least for now.

In the ad, the fake Steve Jobs can be seen telling punters that they need be jealous of their iPad toting friends no more, thanks to a giveaway the tea company is running. Sounds great, doesn’t it?

Whether you’re a tea lover or not, you do have to admit that whoever the Steve Jobs impersonator is, he’s a pretty good look-a-like!

Of course, this isn’t the first time Jobs has been the subject of such a stunt.

Late last year one company saw fit to manufacturer and attempt to sell a Steve Jobs action figure – an attempt that saw the legal team from Apple spring into action with alarming speed. Soon enough, the action figure was no long available, which was a shame really, as we really rather liked it! But then again, we can tell that Apple didn’t dig the idea one bit.

The public’s obsession with Jobs, while entertaining, could actually hint at potential issues to come for the California giant.

With speculation over Jobs’ health once again rife, and Apple’s stock doing so well, many are wondering what Apple will do when its iconic CEO retires.

The company is clearly trying to push other team members into the limelight during its keynotes and earnings calls, with the likes of Scott Forstall, Phil Schiller and others finding themselves increasingly more public-facing than in the years gone by.

Is Apple all too aware that once Jobs has left, a new figurehead will be needed to take his place? While there are potential candidates to fill Jobs’ shoes, but we’re somewhat skeptical whether the next CEO would be as good as Jobs himself.