This new patent submitted to the US Patent Office suggests that Apple might be looking into implementing 3D gestures into a future iOS device in order to allow effortless data transfers across devices. 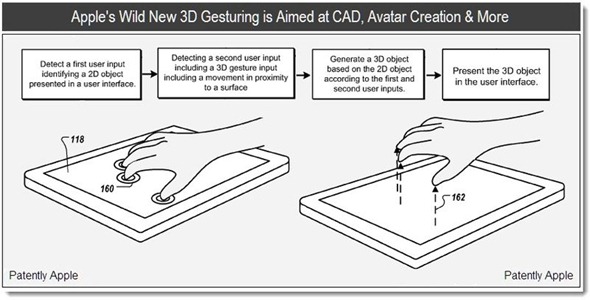 3D gestures will allow users to interact with the device not only by touching the screen, but by moving their fingers near it:

Three-dimensional objects can be generated based on two-dimensional objects. A first user input identifying a 2D object presented in a user interface can be detected, and a second user input including a 3D gesture input that includes a movement in proximity to a surface can be detected. A 3D object can be generated based on the 2D object according to the first and second user inputs, and the 3D object can be presented in the user interface.

From what we could gather, this patent would allow for Iron Man-style input, with virtual controls showing up in thin air:

OK, maybe we’re taking this a little bit too far, but this patent also suggests that Apple might be working on glass-free 3D devices: 3D would be a requirement for this kind of gestures, and not that many people would want to wear glasses while using their phones. While Iron Man 2 might not come true anytime soon, Apple has mentioned some pragmatic applications for this, including the creation of 3D models for anything from avatars to consumer products and real estate maps:

Apple files several patents every week, sometimes just to make sure it gets credit for its ideas, but many of the technologies that are described at great length to the US Patent Office never make it to a consumer product. It’s important to note that current-generation iOS devices don’t even feature 3D displays, so we’ll likely have to wait a few decades before we can create 3D models from thin air.