Blu-ray On Mac OS X Is Finally A Reality, Thanks To ‘Mac Blu-ray Player’

Those familiar with Mac OS X are probably aware of the platform’s major flaw when it comes to media playback: there’s no official Blu-ray support. Despite many requests for it to be supported, Steve Jobs has long dismissed it as a “bag of hurt”, and therefore no Mac ships with Blu-ray drives or Blu-ray playback software. Macgo Mac Blu-ray Player will change all that: introducing the first Blu-ray player for Mac OS X!

Macgo Mac Blu-ray Player is indeed the first of its kind, but also familiar to those who’ve used Mac OS X’s built-in DVD playback tool or essentially every media player out there. Developed by a third party, this tool shows how easy it would have been for Apple to implement Blu-ray playback if it had wanted to. More than just Blu-ray, this player can also act as your universal media player, with support for a wide variety of video file formats, including MOV, MKV, AVI, FLV, WMV, MP4, MPEG, RMVB, MP3, WMA, AAC and AC3. Macgo can also play your DVDs and video CDs, if you’re so inclined. 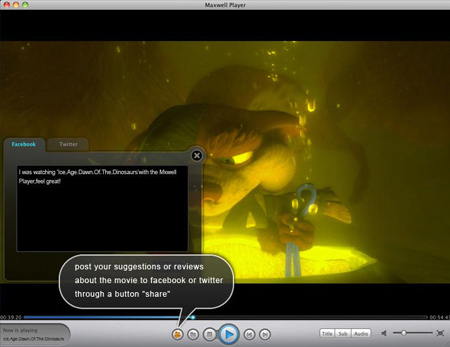 Blu-ray is the only widely-available high-definition format for optical media, capable of playing back 1080p video. Before Blu-ray was available, the best optical medium around was DVD, although its playback quality is laughable at this point. Although Blu-ray has been widely available for several years, and adopted by many PC makers, Apple has been reluctant to implement the technology and offering iTunes Movie Downloads as its alternative for HD video video playback.

In order for Macgo Mac Blu-ray Player to work, of course, you’ll need an external Blu-ray drive, or an internal one if you’re able to set it up yourself. MacGo is supposed to be able to play back any Blu-ray disc on the face of the earth, therefore you’ll finally be able to watch your whole HD movie collection on your Mac.

You can get a 90-day free trial right now and upgrade to the “lifetime version” for $39.95, if you figure that this product is right for you. Could this be the beginning of Blu-ray adoption on the Mac?

Was it so hard, Apple?

You can give Macgo Mac Blu-ray player a shot by heading over to this link and start your free 90 day trial instantly.