Samsung is busier than most when it comes to releasing new devices, but while the South Korean company offers dozens of smartphones and tablets, the main topic of conversation right now pertains a supposed smartwatch effort. The Twitter handle @evleaks, famed for getting hold of snaps and information about new products prior to their showcasing, has done it once more with the alleged Galaxy Gear smartwatch, releasing what appears to be a screen capture of the Android interface of the device’s “Galaxy Management” companion app.

Unfortunately, evleaks doesn’t offer a proper glimpse of the wearable tech, something that, with more and more reports offering legitimacy on what was initially perceived as a speculative suggestion, would certainly give us a face to the name. With that said, the leak is still fairly exciting, and given that evleaks tends to offer consistently accurate information, we’re inclined to believe that this will indeed be the Android interface for users pairing their smartphones with Galaxy Gear.

So, what do we have? Well, along with a handy Find My Watch feature allowing you to track the whereabouts of your Galaxy Gear (surely harder to lose than the smartphone itself, I would have thought, but I digress), there’s also an icon for general Settings, Clock, and Help.

In the build-up to the Galaxy Gear, it has been suggested repeatedly that Samsung would not be using the Google Play Store as its main outlet for apps on the product, and the leak sheds even more light on this claim. Because as well as the My Apps icon shown within the UI, there’s also the Samsung Apps section, one that we’d expect it be sufficiently stocked up in time for launch. As the Suwon-based outfit continues to show its software innovation credentials year-in, year-out, it’s little wonder that the company wants a piece of the app store pie, and although the current range sees many downloads already, the Galaxy Gear could be the catalyst for a more meaningful push. 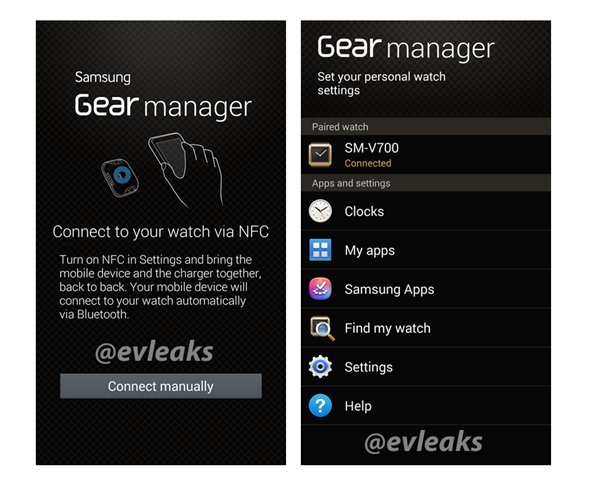 Speculation of the Galaxy Gear retaining only ten hours of battery mightn’t have gone down too well with prospective consumers, but until Samsung comes through with the official announcement, we’ll be reserving judgment, while also hoping that it retains juice a little better than some are projecting.

The Galaxy Gear is expected to be announced at the Samsung Unpacked 2013 event alongside the Galaxy Note 3 on September. Mark your calendars, we’ll bring you the updates as soon as they unfold!