One of Samsung’s top executives in the their mobile division has slipped out news which we have all been waiting for. Lee Young-hee, who operates as Vice President of Samsung’s mobile arm, has confirmed in an interview with local press that the South Korean company will indeed by introducing the world to two new products as part of their Samsung Unpacked 2013 media event. As we expected, the third-generation of the gigantic Galaxy Note will make an appearance, but it’s perhaps the confirmation regarding the existence of the Galaxy Gear smart watch that will manage to capture most attention.

The interest in wearable technology is at an all-time high at the moment, with companies like Apple and Samsung coming under the microscope in recent months due to their willingness to invest time and money into researching smart watch products. A number of ‘iWatch’ patent applications have all but confirmed that the Cupertino based company have their own wrist technology in the pipeline, but Young-hee’s comment suggest that Samsung will be the first to introduce their technology to the world.

Unfortunately, the company executive didn’t go into any great detail about either of the two confirmed products, but she definitely did say enough to wipe out at least one of the rumors that we have been hearing. No details regarding technical specifications or capabilities of the Galaxy Gear were given but Lee Young-hee did go as far as to say that the portable technology will not feature a flexible display as previously reported by a number of sources. She also confirmed that the intelligent timepiece will be built around a modified version of the Android operating system, something which we can add to a list of missing Galaxy Gear specs we’ve seen in the past. 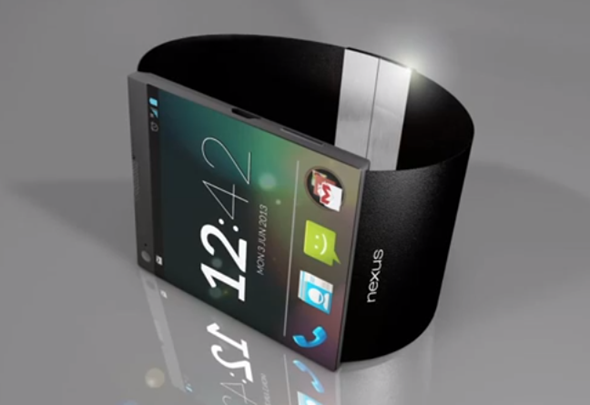 It’s highly likely that the Galaxy Gear will be built to highlight and compliment the company’s current and future range of smartphone devices, which makes the Android choice hardly surprising. The Galaxy Note 3 is also an announcement that is likely to drum up a lot of interest from current Note owners and those who are looking to get in on the “phablet” action. The device is likely to have a huge 5.6-inch AMOLED display that will display beautiful images taken using the 13-megapixel rear camera. September 4th is just over a week away so we don’t have long to wait for all of this Samsung goodness.