Apple may be expected to announce the iPhone 5S on September 10th, but at the rate things are being leaked it’s very difficult to believe that there will be any surprises left once Tim Cook and Phil Schiller set about unveiling Apple’s latest top of the range iPhone. As is becoming the norm on a yearly basis now, Apple’s various part suppliers have done a less than stellar job of keeping the new iPhone under wraps, with photos of the production and prototyping process popping up all over the place.

It’s not just photos of the parts that are leaking more than the Titanic though. Actual parts have sprouted legs and found their way into the hands of people with video cameras who, it would seem, just couldn’t wait to show off what they’ve managed to get their hands on.

The latest video to find its way onto YouTube claims to show the fabled champagne / gold iPhone 5S – and we must say it looks very nice indeed. It’s not alone though, because it’s got both a black and white iPhone 5 for company just to help with a spot of comparison making. From watching the embedded video, we’d probably say we prefer the golden iPhone 5S to the white iPhone 5, though the black is probably still our color of choice when it comes to Apple’s smartphones.

Not content with getting hold of an iPhone 5S shell, the videographer also has a colorful iPhone 5C shell to show off to the world. Looking suitably plastic and, well, colorful, the shell looks every bit the cheap iPhone. It reminds us more of an iPod touch than anything else, probably due to the choice of color. We expect the iPhone 5C to be very popular indeed. 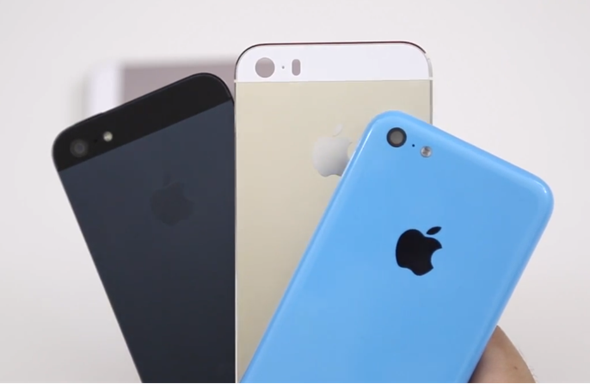 With Apple’s September 10th announcement event drawing ever closer, we just find ourselves wondering what will leak next. Will we soon know the shirt that Tim Cook will be wearing on the day? Perhaps the choice of opening music? We jest of course, but for a company that once prided itself in avoiding leaks, Apple seems to be wide open these days.