Late last week, it emerged that the Galaxy Note 3, along with – possibly – a Samsung-made smart watch, named Galaxy Gear, could finally be shown off to the world at a special event to be held on September 4th. Given that the date has changed frequently over the past couple of months, we were slightly apprehensive in counting our chickens, but the South Korean outfit has just handed out invitations to another Unpacked event on that very date. The company will also be holding another event the following day that will see some other product launches, and although a smart watch would perhaps be a long shot, the press is sure to speculate from here on out.

As soon as the Galaxy S4 was launched to the retail market some months back, attentions immediately turned to the Note 3. The Goliath of the smartphone industry, it tends to offer a similar design and feature set as its flagship cousin, along with a noticeably larger display.

When the first Note arrived back in 2011, many questioned whether there was a market for such a huge device, but the market’s most famous ‘phablet’ continues to draw in large numbers of, presumably large-handed consumers with each new release.

Although exact specifications have yet to be pinned down, we’d expect Samsung to go with the quad-core and octa-core variation seen with the S4. As such, there’ll likely be boatloads of RAM, a 1080p display, and Android 4.3 from the get-go. 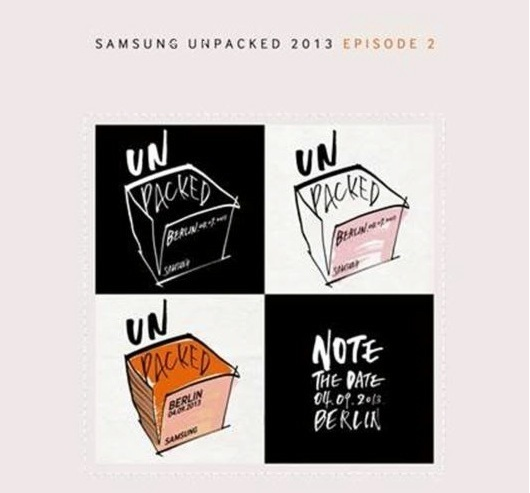 There have been on-off rumors of a so-called ‘Galaxy Smart Watch’ for a while now, and with Apple said to have a dedicated team working on a similar product, this could be an interesting new market for the two mobile giants to continue their ongoing battles. Ever since the Pebble Smart Watch made waves following its Kickstarter campaign, it seems the big names in tech have taken note, so if Samsung is intending to throw its effort out there next month, it could gain an early advantage over its Cupertino counterpart.

We’re certainly looking forward to seeing what Samsung has come up with for the third Galaxy Note, and we’ll be covering all the events of Samsung Unpacked on September 4th. If you’re also in high anticipation of the forthcoming device, be sure to join our coverage here at Redmond Pie!