When it comes to taking “design inspiration” from Apple and its products, Samsung hasn’t exactly gone to extreme lengths in the past to cover up the fact that it admires the aesthetics of Apple products enough to borrow certain aspects for its own hardware.

A recent patent filing published by the United States Patent and Trademark Office (USPTO) shows a Samsung filing for ‘exchangeable strap mechanisms’, with the drawing illustrations and design uploads quite clearly showing the Apple Watch without actually providing any reference to the fact that the visuals were created by Apple, or that they actually show a product manufactured by someone other than the South Korean company.

This isn’t actually a case of Samsung’s designers and legal team uploading a set of visuals and schematics that simply look similar to the Apple Watch as part of an effort to visualize the method of exchanging straps that’s outlined in the patent. The designs shown in the patent filing show a smartwatch that is actually the Apple Watch, and even shows the classic backside charging mechanism that lives on the underside of Apple’s watchOS-powered hardware. The images even show depictions of various Apple Watch bands that are instantly recognizable.

It’s not unreasonable to expect that companies other than Apple involved in the smartwatch space would see the benefit of offering exchangeable straps for their products. One of the real benefits of the Apple Watch is the fact that customers can easily personalize the experience by swapping out bands for a number of official and third-party solutions.

With that said, what is unreasonable is trying to patent a solution that not only uses visuals created by Apple, but that quite clearly show you have essentially set out to copy a rival’s design and method of integration for your own wearable(s). 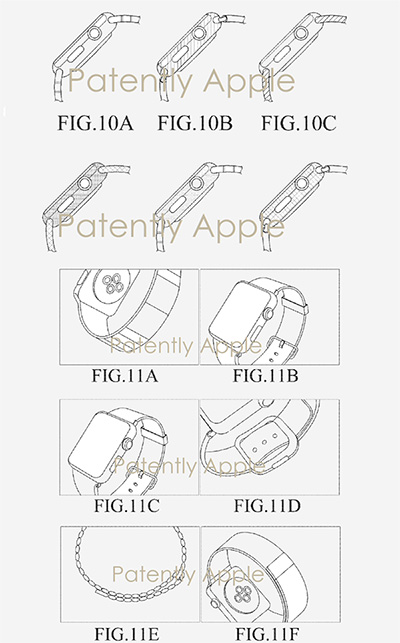 As much as we like Samsung and admire the fantastic products the company manufactures, the real heartbreaking aspect here is that it’s highly unlikely that this is an error or an oversight on Samsung’s part. The reality is that the company has likely taken the path of least resistance by simply taking Apple’s designs and uploading them against the patent application without so much as a care to how it could be seen by wider community.

In fact, it wouldn’t even be wrong to state that Samsung actually tried to patent the Apple Watch here.