Samsung, as expected, has set the scene perfectly for this year’s Mobile World Congress (MWC) to begin tomorrow by officially unveiling its Galaxy S9 and S9+ smartphones at a pre-arranged pre-event press conference. And also as expected, Android fans are set to receive one of the impressive smartphones for this year.

Features: Like most manufacturers in this modern world, executives at Samsung would have been dismayed to see multiple aspects of the devices leak ahead of the press conference. Most of those leaks turned out to be accurate, meaning that we already had a fairly decent idea of what to expect with the S9 and S9+. However, it’s the bits that we didn’t expect which to be the most interesting. As an example, from a design perspective, both devices – compared to last year – now features a glass design comprising of 20-percent thicker glass to improve durable and core strength. Samsung has also made the upgrade to Series 7000 aluminum and made savings on the dimensions by making both smartphones shorter and narrower than Galaxy S8/S8+.

United States consumers will get a set of smartphones powered by a Qualcomm Snapdragon 845 chip (outside US it will be powered by Samsung’s Exynos chip) with 2.8GHz and 1.7GHz quad-core processors. The larger Galaxy S9+, which can really be thought of as the flagship, features a stunning 6.2-inch Super AMOLED display, 6GB of RAM, and a 3,300mAh battery to keep it powered up. If a smaller device is on your agenda, then the S9 is stunning in its own right and comes with 4GB of RAM, a smaller 3,000mAh battery, and an equally beautiful Super AMOLED display at 5.8-inches. All other features of the device remain the same except for the inclusion of a dual-lens camera on the larger S9+ variant.

Both of the devices come with a highly capable 12-megapixel Super Speed Dual Pixel rear camera sensor with OIS and dual aperture, with one having f/2.4 aperture for shooting bright scenes, and the second one coming with a wider f/1.7 aperture for improved low-light photography.

Galaxy S9+ goes a little above and beyond by throwing in an additional 12-megapixel telephoto lens which offers optical zoom and blurring effects, similar to Apple’s Portrait mode introduced with iPhone 7 Plus.

Samsung has also introduced a camera feature it is calling “AR Emoji,” which sounds and functions similar to Apple’s iPhone X Animoji feature as well as Snapchat’s Bitmoji. With AR Emoji, Galaxy S9 owners will be able to “create an emoji that looks, sounds and acts just like them” by using a “data-based machine learning algorithm” and then creates a 3D model.

Apart from all this, the Galaxy S9 series also features 8-megapixel front-facing camera, relocated fingerprint sensor on the back, uses both facial+iris scanning for unlocking at the same time, Android 8.0 Oreo with Desktop Experience features using the new DeX Pad, which lets users use S9 as trackpad, Super Slow-mo capture at 960fps, 4K@60fps video recording, stereo speakers, and more. 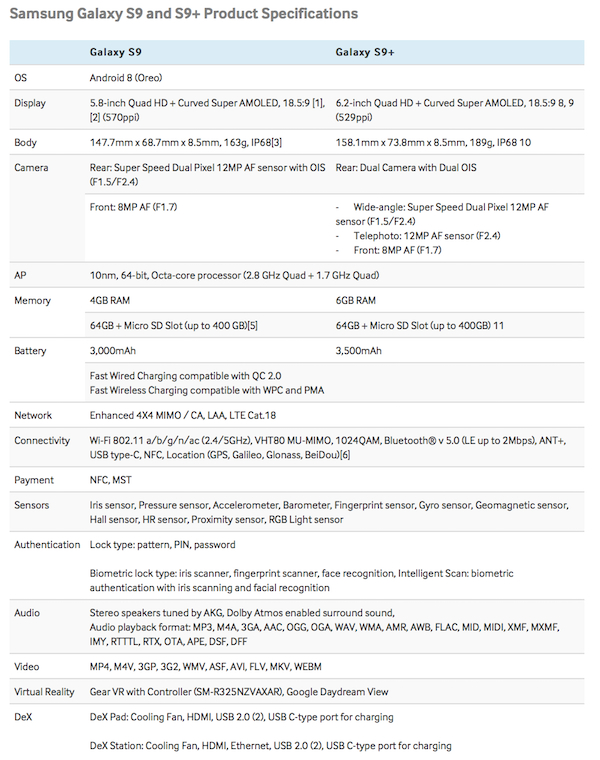