Apple hasn’t even managed to get the iPhone 6 out the door yet, but Samsung has already begun poking fun at not just the phone, but those lining up to buy one, too.

As we all know, Samsung is never shy about prodding Apple and its band of followers and/or customers, but it usually at least waits for the company to get a product out the door before laying into it. It seems that Samsung is so giddy about what the iPhone 6 could do to its own sales that it just couldn’t wait to start pulling Apple’s pigtails, hence a brand new ad. 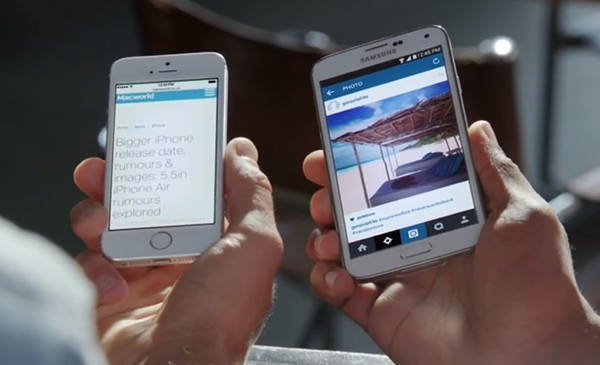 The advert follows Samsung’s usual modus operandi by choosing a particular feature of the upcoming iPhone 6 with which to beat Apple – this time, it’s the expected growth in screen that the new iPhone is to receive that has Samsung pulling out the big guns. With the iPhone 6 expected in two new screen sizes of 4.7-inches and 5.5-inches, Samsung is keen to point out that it’s already shipping phones of similar sizes to its happy customers. It just, well, got a little carried away while doing so.

Apple’s current iPhone 5c and 5s are dwarfed by Samsung’s flagship Galaxy S5 and Galaxy Note 4 handsets, which has led Apple to finally consider moving away from the ‘smaller is better’ attitude that has so far governed its smartphone design. Those of us with small hands will be opting for the 4.7-inch iPhone 6, but there’s no doubting that a larger, even phablet-esque screen will appeal to many.

The smaller 4.7-inch iPhone 6 is expected to be announced in September, but the larger model currently has a cloud over it. Some reports point to a later release date for that version of the iPhone 6, though at this moment in time there’s little concrete proof either way.

We’ll find out for sure in a few weeks now anyway.