Apple’s iPhone 12 lineup has now sold more than 100 million units, according to a new report by Counterpoint Research.

That means that the iPhone 12, iPhone 12 mini, iPhone 12 Pro, and iPhone 12 Pro Max collectively managed to hit the huge number just seven months after they went on sale.

That landmark means the current lineup of iPhones managed to hit 100 million to months quicker than the iPhone 11 and around the same as the iPhone 6 — a device that was powered by the switch to 4G and was a huge seller.

The iPhone 12 series’ cumulative global sales crossed the 100 million units mark in April 2021, according to Counterpoint Research’s mobile handset Market Pulse Service. The series was able to achieve this feat in the seventh month after its launch, which is two months earlier than the iPhone 11 series and almost the same as the iPhone 6 series that helped Apple achieve its first volume super-cycle at the cusp of 4G transition. With the iPhone 12 series, Apple has achieved another volume super-cycle after six generations of iPhones and at the cusp of 5G transition.

This all comes amid continued rumors that the iPhone 12 mini has been a particularly slow seller, leading to the decision not to offer a 5.4-inch iPhone next year. The iPhone 13 will get a mini variant however, with that device set to be announced this September. 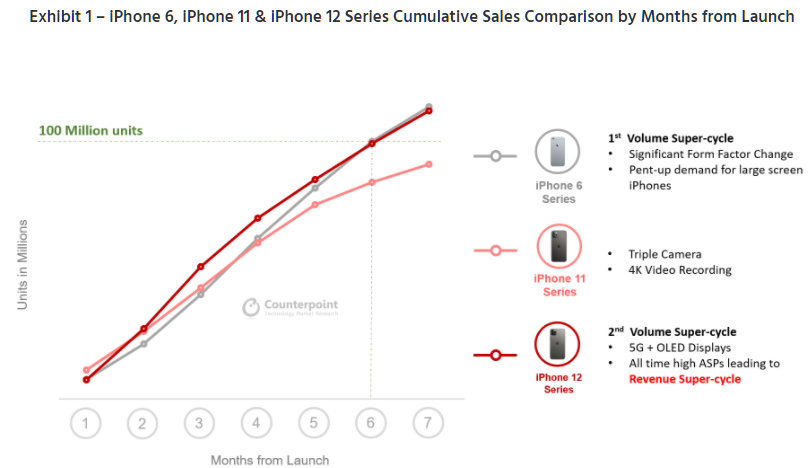 Quite what’s driven the iPhone 12 lineup to such huge numbers isn’t 100% clear, but the move to an OELD screen and 5G connectivity could have had a part to play.