The PS Vita, despite being a relatively powerful device, has continued to struggle in a market where mobile devices are making it easier for consumers to enjoy good standards of gaming on their smartphones and tablets. Despite this, Sony remains determined to plug its handheld marvel, and today, a new firmware iteration brings some much-needed updates. As well as enhanced streaming support, version 2.60 brings some slick alterations to the user interface. Details after the break.

The UI changes are certainly more than welcome, and although there was nothing particularly amiss before, the icon bubbles are a lot easier on the eye. As well as that, there’s a new control panel allowing users to quickly and efficiently toggle various settings from Wi-Fi to Bluetooth. The move is very much akin to what Apple is doing with the iOS 7 Control Center, and should make for a better all-round experience for PlayStation Vita users.

These new controls can be thrown up by pressing and holding the PS button, so no matter where you are on your device, you can manage your key connections with absolute ease.

With regards to the new streaming features, those wielding a Vita can now watch content right from their connected gadgets without the need to save anything locally. This makes the process just that little bit more streamlined, and although Sony is quite openly preparing this feature in anticipation of the upcoming PlayStation 4, Vita users can bear the fruits long before the next-gen console hits the market. 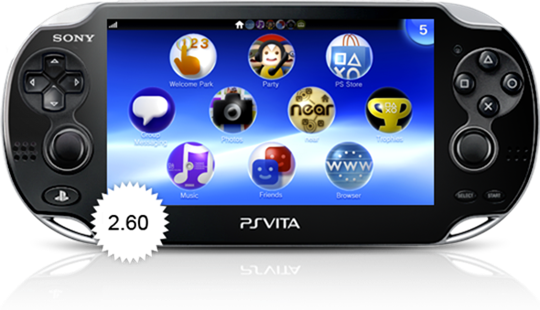 Despite the Vita’s toil in pinning down a viable market since its release, Sony will be using the hype generated by the PlayStation 4 to rejuvenate the fortunes of its flagship handheld. With every title getting Remote Play streaming support, there’s no doubt that the Japanese company wants the PS Vita and PS4 to complement each other in a two-pronged attack on the gaming world.

Whether the move will prove successful in getting more Vitas in hands remains to be seen, but with much of the technology world gripped by yet another strain of console fever, perhaps Sony will indeed prove the naysayers wrong and keep the dedicated portable console market alive.

So, are you going to update your Vita to 2.60? Or, do you plan to hold off for a bit for some reason?