When new smartphones are released, and especially when they are deemed to be heavily competing products, potential buyers and owners of other devices are always interested in finding out which is best, often with comparisons covering many things it’s easy to have an opinion about, but not that easy to quantify. Sometimes, though, there’s something that’s so obvious, it’s impossible to ignore. 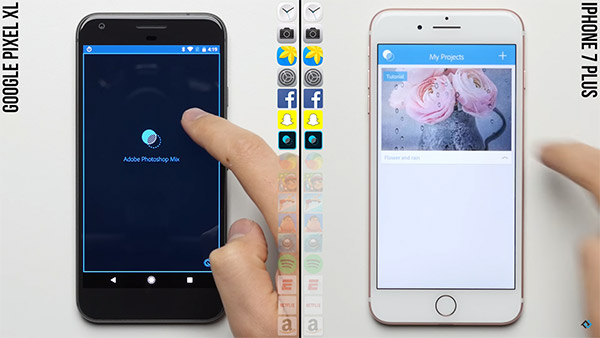 Take the iPhone 7 Plus and Google Pixel XL as a prime example. Both devices are currently at the top of the tree, with the Pixel the latest Android device and replacement for all things Nexus and the iPhone 7 Plus being the latest thing to come out of Cupertino. They’re both excellent phones in their own right, but when you compare them on things like real-world speed of launching apps etc, things can often start to unravel.

That’s exactly what has happened here with the Google Pixel XL and Apple’s iPhone 7 Plus. The almost 5-minute video embedded below shows each phone having a predefined list of apps launched in quick succession and then timed. Both the iPhone and the Pixel undertook the test as part of the video, with the results obvious for all to see – the Pixel XL needed three minutes and five seconds to complete the run of opening the preselected apps, whereas the iPhone 7 Plus required just one minute and 55 seconds in order to launch the same apps, in the same order.

Apple’s flagship with 3GB RAM in it seemed to be the winner in memory management as well, with Google’s phone with 4GB RAM failing to resume a significant number of apps from the selection, having to reload them from scratch.

We like this video because it’s the closest thing to a real-world test we can find without using both devices for days, and this makes for a great video showing the facts in a way that’s interesting and informative. For example, it’s informed us that the Pixel XL may be an excellent Android phone, but there’s something very wrong with regards to this test, whether that be Android being particularly unsuited to it or something else.

Whatever the cause, it’s a bad day for Pixel.