Another day, another jailbreak tweak. Today’s offering is a simple tweak that brings a functionality to the iOS Photos app that some would argue should have been there from day one – the ability to upload photos straight to ImageShack.

The official description from the tweak’s developer goes some way to explain just how simple a tweak this is – there are no options, no settings, and no icon. The tweak adds a new button to the Photos app’s sharing screen, but that’s as complicated as it gets folks.

Photos Image Upload – a tweak that enables you to upload photos right from the iPhone’s photos app. The sharing menu adds the ‘Upload’ option to send the photo to Imageshack. The URL is copied to your system pasteboard. 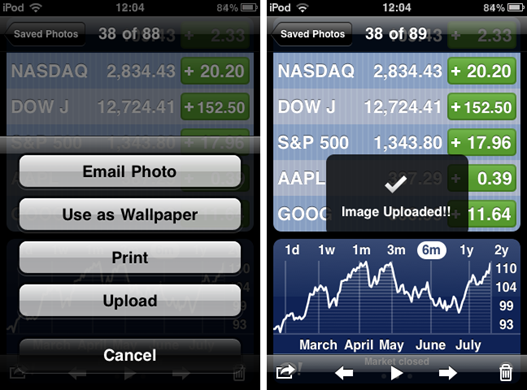 Photo Image Upload is available via the Cydia app store under the BigBoss repo right now and costs the reasonable sum of absolutely nothing.

You can’t say farer than that now, can you?

As with all the best jailbreak tweaks, Photo Image Upload adds a feature that many will have been crying out for, without adding any unnecessary clutter or options.

What would we ever do if Apple killed off jailbeaking once and for all? In fact, would would Apple do, seeing as most of their new features come from the jailbreak scene?! Apple’s iOS 5 and its new fangled notification system was created by the man behind one of the jailbreak scene’s favorite tweaks – Mobile Notifier.