Google is expected to drop a handful of Nexus series devices this fall, and according to an alleged mobile retailer database listing, the Samsung-manufactured Nexus 2 will be one of those handsets, along with a 32GB iteration of the ASUS-made Nexus 7 tablet.

The database image is said to have been snapped from Carphone Warehouse in the UK, and it looks as though the popular, compact, quad-core tablet will be an option sometime soon. That’s not the most noteworthy feature of this particular shot, though, since the highly-rumored Nexus 2 also looks to have been unofficially confirmed thanks to the Invisishield product also listed on the database.

At present, the Google Nexus 7 is only available in the 8GB and 16GB configurations, and although that may be enough for many, the lack of expandable memory renders the slate out of the question for power users. With both the Kindle Fire HD from Amazon and the Barnes and Noble Nook Tablet offering more space, a 32GB edition certainly ensures Google will not be outdone on storage capacity alone. Although cloud-based services make it easier for consumers to carry additional content, they’re seldom a substitute for carrying it locally, and fans of music, movies and music videos especially will be buoyed by the news of a larger Nexus 7. 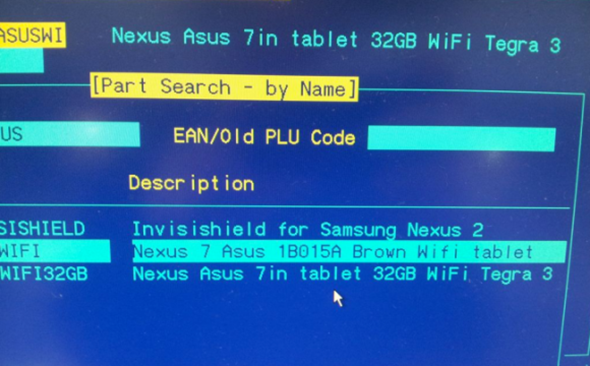 It has been rumored for a while that Google would bring as many as five new Nexus devices to the fold this holiday season, so the Samsung Nexus 2 is certainly not beyond the realm of possibility. We’ve already seen images supposed to have been taken by the device’s camera, and although we don’t really have much to go on with regards to design, form-factor, or other key specifications, we’d expect a Samsung-made device to be of the highest order.

It’s important to note that the "2" moniker for "Invisishield for Samsung Nexus 2" may just refer to the quantity of Invisishields available in the packet, or could relate to something the Carphone Warehouse uses to differentiate actual products with peripherals and accessories.

Whatever may be the case, we’re likely to be seeing more than one new Nexus in the next couple of months, and we’ll have our eyes and ears peeled for any further information regarding any of them.