Whenever a new smartphone hits the market, there are a few key areas we, as consumers, focus our attentions on. Storage space, camera quality, processor speed, design, display size – these are all factors we tend to take into consideration – however, in line with the widespread push to look after the planet, more and more consumers are looking to see which smartphone is the least harmful to the environment.

As well as being the hottest device on the smartphone market right now, Apple’s brand new iPhone 5 device is among the most environmentally friendly out there. In fact, Aside from the Motorola Citrus, LG Remarq, Samsung Captivate and its predecessor – the iPhone 4S – it uses the lest harmful and hazardous chemicals of any handset you could buy.

A study carried out by Healthystuff.org in collaboration with iFixIt saw the Cupertino company’s iPhone 5 broken down and pitched against a glut of other smartphones and older iPhones, and tested for usage of chemicals like lead, mercury, cadmium, hexavalent chromium, polybrominated biphenyls and polybrominated diphenyl ether.

Although the iPhone 5 is thinner, lighter, and faster than the iPhone 4S before it, the older smartphone is less harmful to the environment, and with consumers slightly happier with iOS 5 versus iOS 6, it’s just another reason to perhaps consider the older of the fruit company’s two most recent smartphones.

In terms of rankings, the lower number is better, and while the iPhone 5 ranked fifth with a 2.80 score, the iPhone 4S ranked 2.69 – second only to the Citrus from Motorola. The chart does show how much the iPhone has improved through versions though, and while the original iPhone scored 5.00 – the very worst score overall – the iPhone 4, 4S and iPhone 5 are all among the least hazardous, and each fare better than the Samsung Galaxy S III. 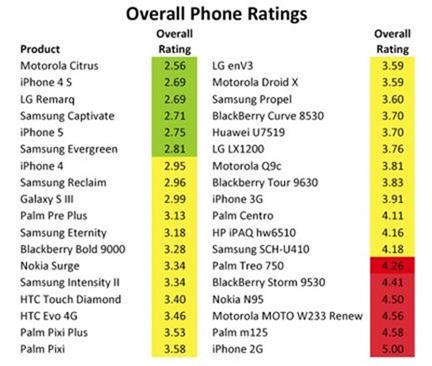 Naturally, those toward the bottom of the chart – thus most hazardous to the environment – are older devices, and as time has gone on, it looks as though most vendors have sought to eradicate the use of materials perceived as harmful.

Does the iPhone 5’s environmental-friendliness widen its appeal to you? Or are you only concerned with specs, specs, and more specs?

Please do share your thoughts via the usual mediums below.