For those Android lovers out there who were big fans of the original Samsung Galaxy Nexus smartphone, then be prepared for that joy to come around once again as it looks like Samsung could be close to officially unveil the next-generation Nexus handset. A new set of images have started emerging today that show the model number of the camera used as GT-I9260, a number that we have seen on a number of occasions in the past and that has been repeatedly linked with the new Galaxy Nexus II.

It seems to be an extremely familiar and reoccurring thing that we are finding out about potential new devices through seeing various leaks online and then stitching the information together to get close to the full picture. The last few months have seen multiple Galaxy Nexus II rumors emerging, with a set of specifications coming into the public eye as well as a new User Agent Profile becoming available that once again displayed the mysterious model number in all of its glory.

There is nothing particularly out of the ordinary with the set of images that have appeared on the Picasa photo-sharing website, other than the information that accompanies the images makes reference once again to the same model number that we have been seeing bandied around the internet over the last few months. The information also gives away details regarding the dimensions of the captured images, as well as the file size of the photograph in question, but it doesn’t really offer any additional insight into the real identity of the device. 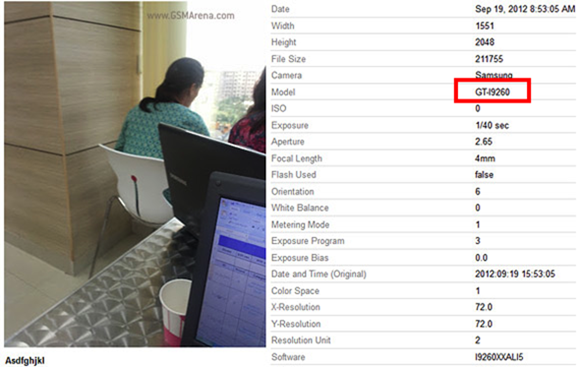 The GT-I9260 model would seem to fit in nicely with Samsung’s previous internal name conventions, given further evidence that this could indeed be the new Galaxy Nexus II. With the smartphone market hotting up thanks to the release of the iPhone 5, the current success of the Galaxy S III and Nokia imminently set to launch the Lumia 920, it looks like those Android lovers out there could possibly have a difficult decision to make soon if the Nexus II comes to fruition. If Samsung does take the opportunity to hit the market with the Galaxy Nexus II, then reports are also suggesting that it could be debuted running Android 5.0, or Key Lime Pie as it is also known.