Information concerning Xbox Music has been leaking continually over the past couple of weeks, and it has been unofficially confirmed that the Redmond company’s streaming music service will be arriving on October 26th – the very same day when Windows 8 is made available to public.

Sources of TheVerge "familiar with Microsoft’s plans" have said that as well as dropping on the same day as the eagerly-awaited Windows 8 operating system, there’ll be a free streaming, ad-supported service for those wishing to test the waters. Similarly to Spotify, which operates the same freemium model, users will be able to pay a monthly fee to enjoy the service without the advertisements, as well as subscriptions like Zune Music Pass.

Although named after the software maker’s flagship console, those running Windows Phone 8 and Windows 8 will also be able to utilize the service along with Xbox 360 users.

Microsoft’s SkyDrive, which launched properly a couple of months ago, is a big part of Windows 8 as a whole, it’s not surprising to learn that SkyDrive will play an integral part in this new streaming initiative. Users will be able to store their music and playlists in the cloud, making them available across a variety of devices – much how iCloud works with OS X and iOS devices.

Eventually, Microsoft wants Xbox Music to be a cross-platform affair, incorporating iOS and Android as well as Windows Phone, although apps for the big two mobile ecosystems will not be available right away. 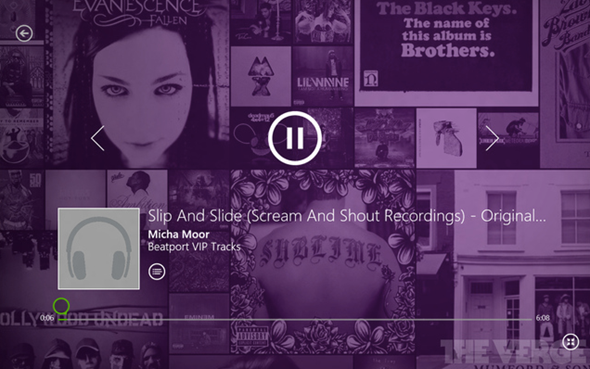 A Dashboard update will incorporate Xbox Music onto its flagship gaming console, while the Music and Video apps for Windows 8 will also be updated to support Xbox Music after launch. No dates have been mentioned for either of those particular changes, although they’ll likely occur on or around the 26th of this month, October.

With a new operating system, improved mobile platform, and a bunch of new devices hitting the market for it, now seems like a great opportunity for Microsoft to launch a proper music service. Zune has lived in the shadow of Apple’s iTunes Music Store, but by rebranding and adding millions of tunes, Steve Ballmer’s company could be about to challenge the Cupertino’s supremacy.