Good news, jailbreakers! The Chinese team Pangu has managed to successfully jailbreak iOS 8.4.1. They demonstrated their jailbreak on an iPhone 6 running the latest iOS 8.4.1 at the recent HackPwn2015 security conference.

After Apple patched so many exploits in iOS 8.4.1, the chances of iOS getting jailbroken again this soon looked grim until today when the official Weibo account of HackPwn2015 confirmed the good news of Pangu successfully jailbreaking iOS 8.4.1.

With iOS 9 releasing in a matter of weeks now, it wouldn’t be wise for Pangu or any jailbreak team for that matter to burn these all important jailbreak exploits for a minor update like iOS 8.4.1. It’s likely that team Pangu will save these exploits for jailbreaking iOS 9 and the upcoming iPhone 6s and iPhone 6s Plus. 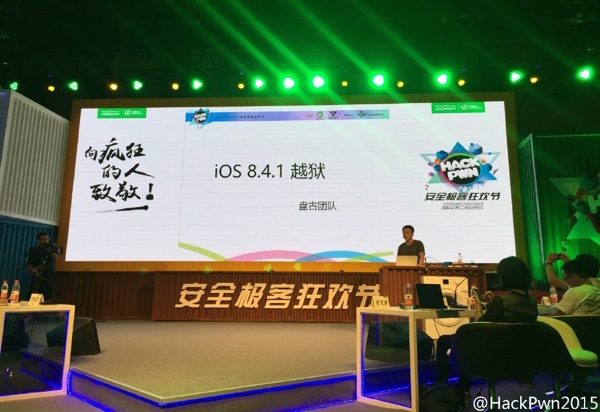 If you have accidentally updated to iOS 8.4.1 and want a jailbreak, the good news is that Apple is still signing iOS 8.4 firmware, which means you can downgrade your iPhone, iPad or iPod touch to 8.4 and then jailbreak using either TaiG or PP jailbreak tools. The signing window could be closed any day now so if you are looking to downgrade, do it now before it gets too late. You can find instructions on how to downgrade to 8.4 here: Downgrade iOS 8.4.1 To iOS 8.4, Here’s How [Tutorial].

So, what do you guys think? Excited for a potential new jailbreak (hopefully) coming soon after iOS 9 is made public?