Apple Offers Free Camera Replacement On Faulty iPhone 6 Plus Units, Check If Yours Is Eligible

Apple has just launched an ‘iSight camera replacement program for iPhone 6 Plus’ following confirmations that some devices sold between September 2014 and January 2015 have a faulty component in the camera module, which results in blurry photos.

In a newly published support page, Apple has announced that only a small percentage of the devices within a specific serial number range are the ones affected by this faulty component. Complaints of iPhone 6 Plus users started surfacing as early as September last year where the phone’s camera was producing some extremely blurry photos.

“If your iPhone 6 Plus is producing blurry photos and falls into the eligible serial number range, Apple will replace your device’s iSight camera, free of charge,” says Apple on its specially created support page. To be eligible for this free replacement, Apple wants you to meet two conditions; your iPhone should be producing blurry photos, and should fall within a serial number range.

Make sure to select your country of location as well, because that will influence the replacement options you get. Typically, if determined eligible for the replacement, you could head over to the nearest Apple Authorized Service Provider or Apple Retail Store. Alternatively you can place a call to Apple Technical Support for further details. 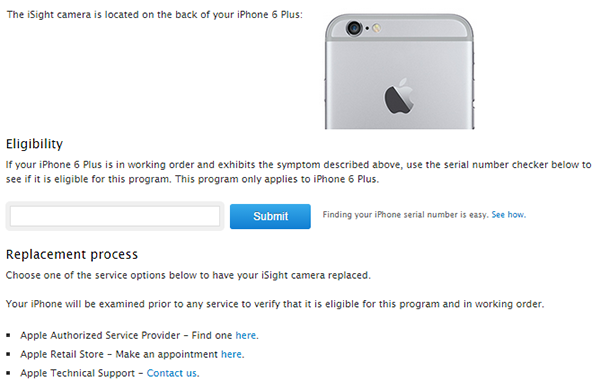 The problem seems to be associated with the use of the Optical Image Stabilization component, which is not present in the smaller iPhone 6, and as such does not suffer from any such issue. But what if your iPhone 6 Plus falls within that serial number range, and your camera works just fine? There is the possibility that the problem could develop in the future. Luckily, Apple realizes this as well, and as such states that, “The program covers affected iPhone 6 Plus iSight cameras for 3 years after the first retail sale of the unit.”

A welcome move indeed, which surprisingly comes almost a month before Apple launches its new iPhone 6s and iPhone 6s Plus with Apple’s new A9 processor, 2GB RAM, 12MP camera, Force Touch, among other things.