As was expected, Microsoft today on Day 2 of Professional Developers Conference (PDC09) has released Microsoft Office 2010 Beta to public via Microsoft Download Center. General public can now test and evaluate the latest version of Office 2010 to help make the product better before it hits RTM sometime next year. The Build number of Office 2010 Beta is 14.0.4536.1000 which is newer than the previously leaked build 14.0.4514.1009. 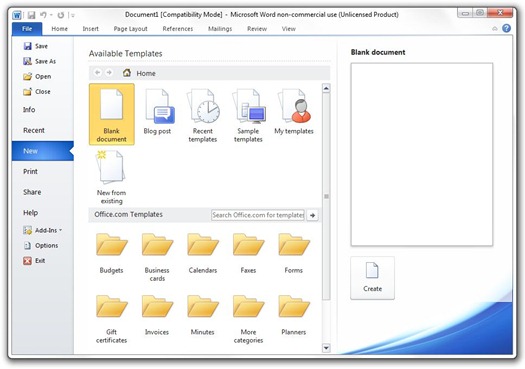 This is the same build which MSDN and TechNet Plus subscribers got 2 days ago and it is available in both 32 and 64-bit flavors. Web Applications Server 2010 Beta is also available for download in x64 only for self-hosting Office Web Apps.

Office 2010 Technical Preview, Beta 1 and Beta 2 milestones were leaked earlier in July, August and October 2009 respectively. Check out our Office 2010 Activity Center for the complete coverage on the latest version of Office Productivity Suite.