We’ve been hearing a lot of rumor and speculation regarding Nokia’s supposed effort to bring its first smartphone running on Android to market, and while it has been suggested on numerous occasions that next month’s Mobile World Congress (MWC) could be the venue for the grand unveiling, Nokia has now all-but confirmed this to be the case by sending out invitations to a special press event kicking off on 24th at 8.30AM. The invitation doesn’t, of course, specify what will be on show, but with everything seeming to point towards the mid-range handset – codenamed ‘Normandy,’ we could be just one month away from seeing it in the flesh.

The software that Normandy will run on is unlikely to be your typical, familiar Google stock Android. In fact, from what we’ve seen by way of leaks, the "forked" version of the search giant’s mobile OS is going to look very much like the Microsoft creation that is Windows Phone, with a touch of the Asha interface thrown in for good measure.

With so many great Nokia devices available but out of bounds to those who won’t for numerous reasons, use Windows Phone, it’s kind of disappointing that this inaugural effort is unlikely to set the world alight in terms of specs and hardware. However, it does seem that Nokia is merely testing the water, and if Normandy’s launch proves a successful enterprise, there’s certainly scope for the likes of the Lumia 1020 and other similar handsets making their Android bow in the future.

The rumors of Nokia considering an Android handset have been circulating for months if not years, but with the Finnish telecoms giant having been acquired by Microsoft back in September, it did appear that any hope of this idea reaching fruition died with the signing of the contractual agreement. 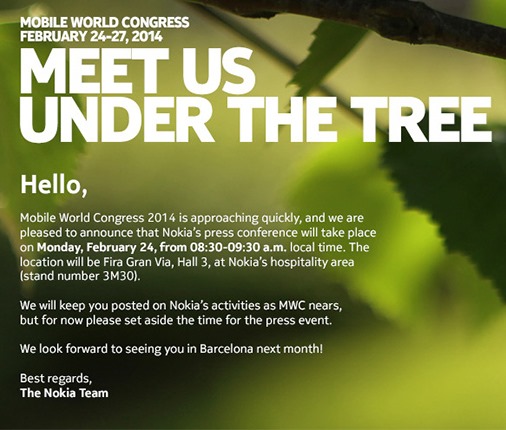 But the rumor mill, allied to the buoyant nature of the invitation, suggests that there may still be life in the Android-Nokia collaborative effort just yet. We’ll be keeping an eye out for more info on this, as well as other MWC-related tidbits leading up to the event in just over four weeks’ time, so stay tuned!