New Patent Envisions Adding A Camera To The Apple Watch

The Apple Watch Series 4 is already a huge hit with buyers, but there’s one thing the wearable still lacks that many believe it needs – a camera. And according to a new patent that was granted yesterday, Apple may have the solution.

Putting a camera into a watch has all kinds of pitfalls, not least how you would make it so that the camera can point at the subject while the display is still visible to the wearer. Apple’s patent appears to account for that by placing an adjustable camera into the watch’s band.

A potential barrier to smartwatch adoption is their minimal image-capturing ability. Some embodiments described herein include a smartwatch with the functionality of a camera that is independently positionable relative to a watch body. This can allow the smartwatch to capture images and video at angles and orientations that do not depend directly on the angle and orientation of the rest of the smartwatch, including the watch body. Such functionality can replace or at least meaningfully augment a user’s existing camera or camera-enabled device (e.g., smartphone, tablet). Such a wearable device that captures images and video may do so via an optical lens integrated into a distal end portion of a watch band that retains the device on a user’s wrist.

As for actually taking a shot, the patent suggests that there could be multiple methods including a verbal command, touching the watch band, or simply pressing a button.

The optical sensor may capture images or video when the user takes an affirmative action such as pinching the camera watch band, giving a verbal command, pressing a button on the distal end portion of the camera watch band, or pressing a button on the case (e.g., on the screen of the display, which may include a graphical input on a touchscreen of the display). 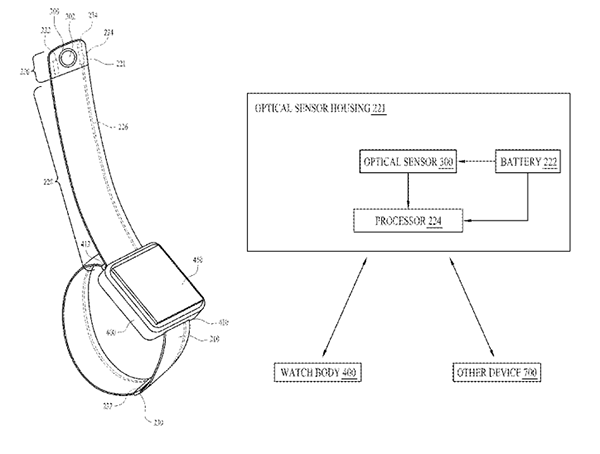 Of course, the fact that Apple has been granted a patent doesn’t mean that anything will come to fruition. Apple applies for, and is granted, many patents every year and only a portion of them make their way into a shipping product. That said, if the Apple Watch is indeed to replace the iPhone in some peoples’ lives, having a workable camera is a must.