It’s not just Apple’s iPhone that finds itself the subject of speculation and even the odd concept drawing, you know. These days, Samsung is undoubtedly one of the biggest players in the smartphone world, and as such it is without a doubt one of the few companies that can garner the same kind of attention as Apple when it has a new product in the pipeline.

The Galaxy S IV is the latest phone to end up at the center of internet rumors and guesswork. As such, it too is currently finding itself the subject of all manner of concept images, but the latest to catch our attention are certainly some of the best we’ve ever seen. 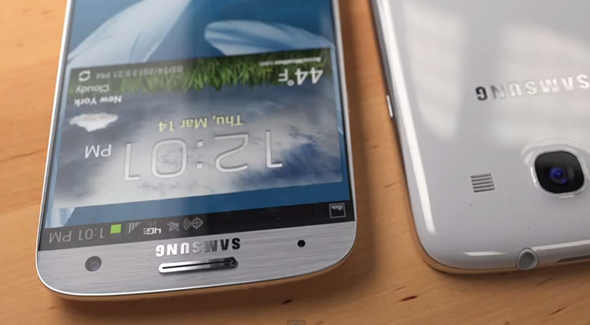 Coming courtesy of Martin Hajek, the images were created to show off what the Galaxy S IV may look like when it is announced by Samsung later this month.

If that name rings a bell, it’s because he’s the same guy behind the iPhone Plus concept images that we showed you recently. He’s nothing if not prolific, and nobody can argue against the quality of both sets.

What does stand out from the Galaxy S IV photos is the addition of a sensor for the recently rumored eye-tracking feature that could mean users will not need to scroll when reading webpages. The claim is that eye movement will cause the screen to scroll, and Martin Hajek has added a sensor just for that. Very thorough indeed.

The device itself is also smaller than the current Galaxy S III, which is interesting considering the rumors that the next device will in fact feature a larger screen, weighing in at 4.99-inches. For comparison, the current flagship handset comes with a 4.7-inch screen. We’ll let Hajek off with that one, though we’d be interested to hear whether that was a conscious decision or simply an oversight.

With the Galaxy S IV due to be announced in a little over a week, we won’t have long to find out just how accurate these concepts are, and we just can’t wait.

We’re sure you can’t, either.