The Galaxy S IV is yet to be announced officially by Samsung, but given the popularity of Android’s most successful smartphone series, it’s not too surprising to see the blogosphere abuzz with speculation regarding the features of the Galaxy S III’s eventual successor. We’ve heard various talk of 1080p unbreakable displays, CES announcements, and April release dates, but as yet, we haven’t much of an idea of its aesthetic form. As we await our first leak, Russian blog rozetked has thrown up a very intriguing concept design featuring a laser keyboard, super-svelte form factor, and an edge-to-edge display, all topped off with a delicious helping of Android 5.0 Key Lime Pie. Sound intriguing? We’ve got more juicy details – and a sumptuous demonstration video – right after the break!

When it comes to smartphones, we all have our individual favorites, but it just so happens that consumers have really taken to Samsung’s Galaxy S series. At the higher-end of the market, it seems to wipe the floor with all other competition, and aside from Apple’s iPhone, is consistently the biggest-selling handset among consumers. 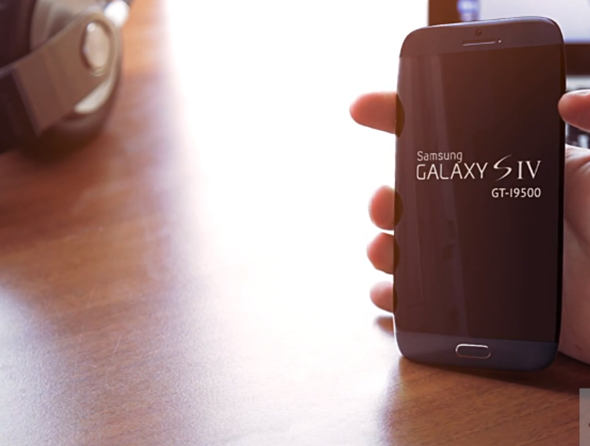 The Korean company likes to go all-out when it comes to features, and we’re expecting nothing less of the Galaxy S IV. Yet while it will likely be the strongest, most feature-laden device on the market when it launches early next year, it’s still rather unlikely to compete with rozetked’s dreamy concept video.

Played over a background of relaxed, Bluegrass music, this thing looks most elegant when docked, and showing off its laser keyboard. Of course, we can rest assured such a keyboard will not be a feature of the real S IV, but if it were to, the general consumer interest would likely skyrocket beyond anything seen previously in the smartphone sphere.

The video reels off a bunch of other specs – mainly akin to those we’ve already seen hitherto, and for the benefit of those whom may not have caught the previous reports, Samsung is likely to pack in a 13-megapixel camera, larger and sharper display, and a bump in processor performance – among a bunch of other enhancements.

CES would seem the likeliest venue for the launch, although it has been said on numerous occasions that Samsung may showcase the sought-after handset at its own special event.