Every now and then, an app for the iPhone will come along and leave us totally speechless, making it something that we have to own and have to use as many times as possible in front of friends or family. Thankfully, this year is coming to a nice end with one of those apps that appears to be somewhat of a gimmick that provides great entertainment at social gatherings or dinner parties, but at $0.99, we really don’t mind. Cycloramic allows all iPhone 5 owners to capture a Street View-esque video of their surroundings without even touching the device.

Cycloramic is actually quite unique in the first instance, and it has been predominately been designed with the iPhone 5 in mind. Although it requires iOS 6 to been installed on the device and will open and run on the iPhone 4 or 4S, it has been developed with the lighter form factor and new vibrating motor of the iPhone 5 in mind. Due to the feature set of the app and the requirement of the device to be standing vertically unaided, it won’t actually work with any iPod touch models. 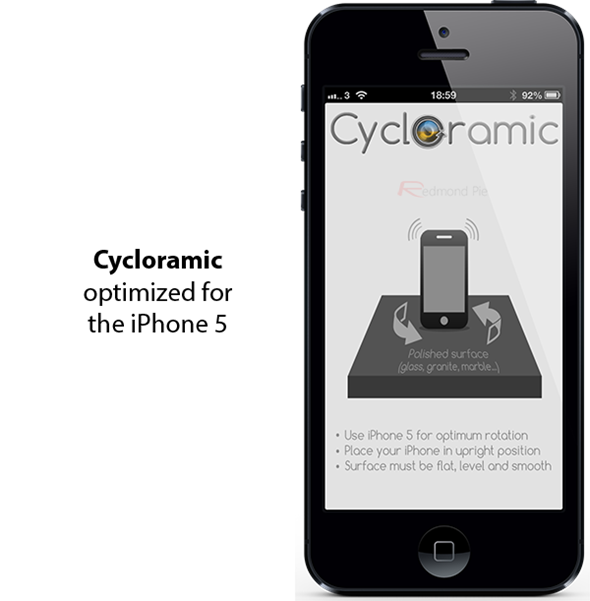 The app itself allows users to use either the front-facing or rear camera to capture 360-degree views of their surroundings and then have the footage stored to the device’s camera roll in the form of a short video. That in itself may not seem overly impressive, but considering the app does it all alone without any interaction from the user after the initial capture instruction, it seems rather outstanding. Standing the iPhone 5 upright on a smooth hard surface and then tapping GO makes the device vibrate at a certain frequency to rotate the phone and capture video as it goes.

There are certain caveats to the app. First of all, if the phone is switched to silent then make sure that the Vibrate on Silent toggle in Settings > Sounds is set to On. Additionally, if the device is not on silent mode then the Vibrate on Ring toggle must also be set to On. Other than that, it is simply a case of installing the app, launching it, setting the device on a hard polished surface and pressing Go. Outstanding.

(Source: Cycloramic for iPhone on the App Store).