When you’re on the way down it can often feel like events somehow transpire against you. It can almost feel like the world is against you, and that you just can’t catch a break. We can’t help but think that’s exactly what the people at BlackBerry are feeling like right now.

As if a smartphone market share very much on the decline wasn’t bad enough for the company formerly known as RIM, the smartphone maker’s one potential ray of sunshine turned to stormy weather over the last few days as it managed to finally get its BBM app out onto the iPhone. Joy was expected. Joy didn’t come.

The reason for that was two-fold. First, people who didn’t already have BBM accounts had to wait in line while BlackBerry got their ducks in a row. Installing the app left them with nothing to do bar enter an email address and wait. Not great, but not the end of the world either.

And then things got really bad for BlackBerry – Apple updated iOS to 7.0.3, partially breaking BBM in the process. Something that can be worked around with, but a pain in the neck for a lot of people.

Fast forward the day or two since then and you arrive at the here and now, and BlackBerry has now had an update to its BBM app show up in the App Store which, apparently, fixes that iOS 7.0.3 problem.

Making the app actually work isn’t the only thing that is part of the BBM update though:

Still, while updates are nice we can’t help but think BBM is already off to a bad start on iOS. That isn’t being reflected in the App Store charts though, where BBM is currently sitting pretty in the No. 1 spot after just a few days of being available for download. 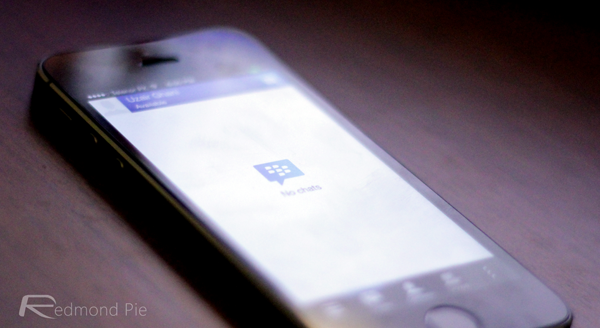 The number of people actually able to use it though will no doubt be rather smaller than those that downloaded it.

You can grab the app for iPhone from the link we’ve embedded below.