iOS 7.0.3 for iPhone, iPad and iPod touch was released shortly after Apple’s iPad event yesterday, and fixed a bunch of bugs which users have been facing for quite a while. While the update does patch many potential bugs, it does partially break the recently released BBM for iPhone app, and in this post, we’ll show you how to get around this crash which users might be facing on the app running on iOS 7.0.3.

If you’ve recently updated to iOS 7.0.3, then you’ll notice that BBM for iPhone doesn’t play nicely with the OS. It constantly crashes as soon as you tap on a contact name under the Chats tab. Turns out there’s an easy way to get around it, but comes at the small cost of losing the entire chat thread. Here’s how you can fix it.

Step 1: Launch BBM for iPhone from your home screen.

Step 2: Now, instead of tapping on a contact name under Chats – which will ultimately crash the app and take you back to the home screen – you’re going to tap and hold on a contact in view until a slide-out bar from the right hand side appears. On the bottom right of the display, you’ll see a trashcan symbol, which deletes the whole thread of the selected contact. Tap it and then a pop-up will appear, tap on End Chat. 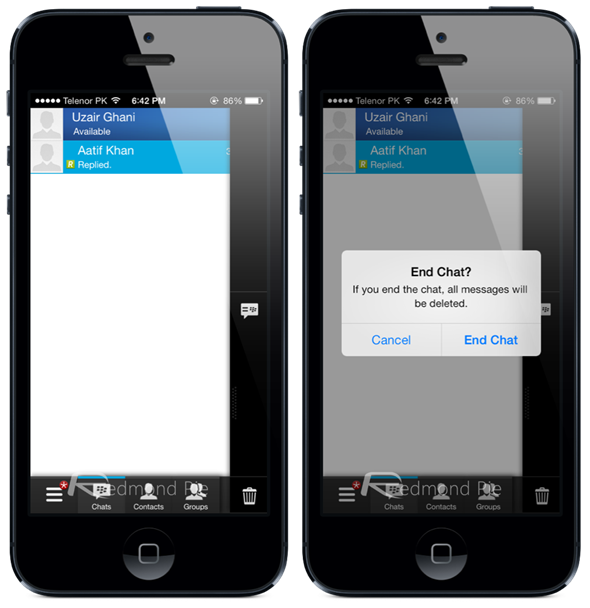 Step 3: Go to the Contacts tab, tap on a contact with whom you want to start a conversation with and you can now start IM’ing that contact normally without facing any sort of issues.

Keep in mind though; this is a temporary fix, and we’re certain that BlackBerry will indeed push out a permanent fix for this via the App Store that will fix the app’s compatibility with iOS 7.0.3. And according to reports doing rounds on the Interwebs, BlackBerry will indeed publish an update later today, so till then, this workaround is your best bet.

Did this fix work for you? Let us know in the comments section below, we love to hear from you.