DJI could be getting ready to announce its smallest drone yet after images of what is claimed to be the new, yet unannounced Spark drone appeared on a Chinese DJI forum.

The images have since been removed, although plenty of them were snagged by the folks over at TechCrunch before that happened. DJI has yet to officially confirm that the Spark is a real thing, although it has gone so far as to trademark that same name. 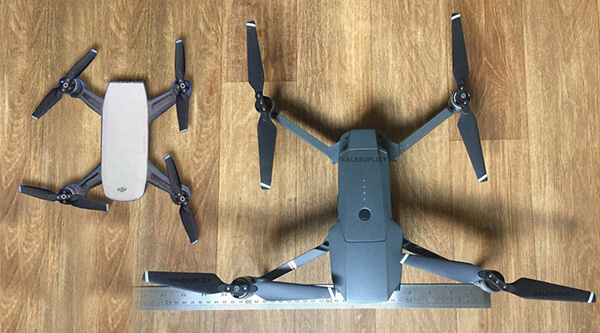 While the images show the new drone to be considerably smaller than DJI’s Mavic Pro, some have already gotten to wondering whether it shares the same foldable design. Given the fact that the Spark, if it is indeed the Spark, is already extremely small comparatively, it is up for debate as to whether it would need such a feature.

Amongst the leaked images are some which show a new, vertical tilting camera that, while not likely to compete with DJI’s higher-end drones, could make it an excellent option for those looking for a drone capable of taking quick photos or videos. DJI offers plenty of drones that cater for the higher end of the market, and the Spark would be a welcome addition at the opposite end of the spectrum.

Given the Spark’s diminutive size and small camera, some on forums have suggested that this may be a drone designed for racing rather than general purpose flight, although we will have to wait for more concrete information on it before we will know for sure.

Questions are also being asked about the controller, which did not feature in any of the leaked images. It is possible that there may be no controller at all, with a smartphone and app combination being all that is required to make this thing fly.

We will find out for sure when DJI shares the full details, whenever that may be.