Jeb Bush may be a front runner as a Republican candidate for the Presidency of the United States – which would effectively make him one of the most powerful and responsible men in the world – but it seems he hasn’t quite gotten to grips with the capabilities of his Apple Watch just yet. It’s been highlighted in the past that Bush is a fan of technology, and in particular Apple products. He’s been an Apple Watch owner for quite some time, and while he has publicly stated that he thinks it can be improved, he has also noted how “cool” he thinks it is. That may be the case, but he apparently didn’t know that he can answer phone calls directly from the Watch.

The Republican candidate for the Presidency managed to answer the call on the Apple Watch, and then confusion ensued. You can hear the caller talking on the other end while Bush appears to be somewhat perplexed about the mysterious voice that he can hear. It doesn’t take long before one of the interviewers’ pipes up and asks if the voice is emanating from the Apple Watch on his wrist, to which Bush replies, “my watch can’t be talking.” It doesn’t take long for all involved to realize that his Apple Watch is indeed talking and is bypassing the connected iPhone to deliver the communication directly to his wrist. “I know when it’s ringing, but I’ve never actually used it,” said a pleasantly surprised Bush. 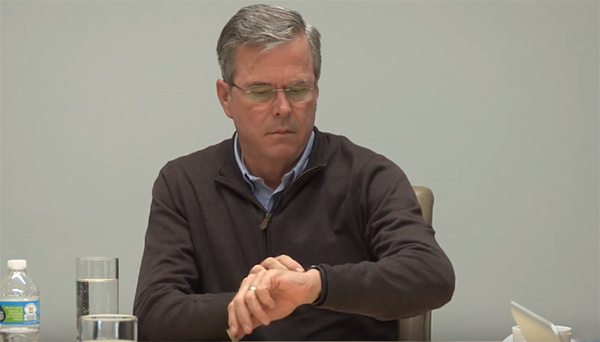 Bush discussed the Apple Watch back in December 2015, outlining his belief that Apple’s first attempt at a smart watch is “cool”, but that it lacks the polished user interface that such a product should ship with; all personal opinion of course. Bush also expressed concerns with the battery life on the hardware, which is something that Apple will likely address with the Apple Watch 2. He may have an opinion on certain aspects of the Apple Watch, but it seems that he hasn’t quite managed to get to grips with all of its functionality and power as this video shows, when he received an incoming telephone call during an interview with the Des Moines Register’s editorial board.

Take a look at the video and see the situation for yourself. It’s nice to see that even after owning an Apple Watch for quite some time, people can still be surprised by what it offers.