As we’re sure you are aware, Apple dropped the first beta release of iOS 9.3 this week, with developers now testing the software and its fairly sizeable collection of changes. Some of those changes, and new features, like Night Shift mode, are actually pretty impressive. But what about speed? Will iOS 9.3 beta 1 knock your socks off when it comes to moving around the system, launching apps and generally going about your day?

Beta releases have been notoriously erratic as far as performance is concerned. Some particular early beta releases can leave iOS devices feeling like they’re running in mud, while others can offer a speed increase that’s a little too much to be a placebo. especially when caught on video! 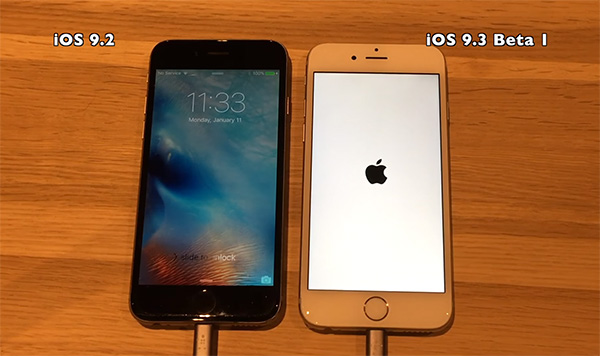 The second beta of iOS 9.2.1 was one that offered a little speed boost over iOS 9.2, so with iOS 9.3 now available in beta 1 fashion, the obvious question needed to be answered – which is quickest, especially on older devices?

As always, one YouTuber has put together a collection of videos to answer that question. Using an iPhone 4s, iPhone 5, iPhone 5s and iPhone 6 to complete the required testing, the results show what appears to be a slight slowing down of the devices when compared to iOS 9.2.

Of course, none of this really means anything because the final shipping version of iOS 9.3 could perform wildly differently when it gets into the hands of the public. We wouldn’t want to say that this first beta release is, in any way, indicative of what will ship, but it does make for interesting viewing, especially if you’re carrying one of the older devices tested. We expect iOS to be snappy on the iPhone 6s and iPhone 6s Plus no matter the version of iOS in use. It’s when you throw older models into the mix that things start to get interesting.

Oh, and it might be time to upgrade from that iPhone 4s. Just saying.