The newly released iOS 4.1 Beta 2 is jailbreakable using the existing version 0.9.5b5 of Redsn0w. However this Redsn0w jailbreak is supported on iPhone 3G and iPod touch 2G only. Here is the update on this from the iPhone Dev-Team blog: 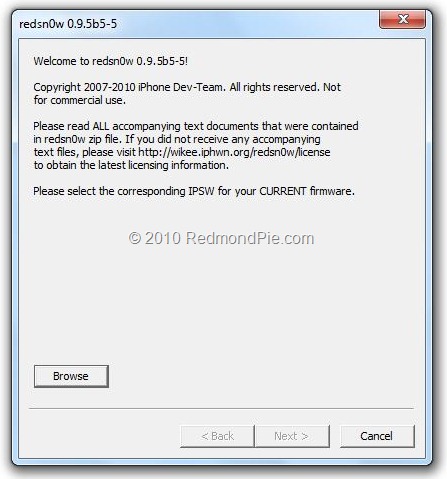 If you’ve updated to 4.1beta2 on iPhone3G or iPod2G(non-MC), you can use this redsn0w from June to jailbreak. Just point it at the 4.0 IPSW (the public one, not the developer GM one).

Don’t do this if you need the ultrasn0w carrier unlock!!

Note 1: This won’t hacktivate your iPhone3G – but for those with legit access to the 4.1beta2 this shouldn’t matter. Please don’t pirate Apple software

Note 2: If you’re at 4.1beta2 you’ll probably experience network problems after jailbreaking. Until a new version of redsn0w is released, you may need to rely on afc2 access (such as FunBox-like file browser programs) to manipulate your filesystem.

Note 3: This is recommended only for power users who can deal with the problems that will pop up as the JB apps fall further behind the beta firmwares.

Full set of instructions on how to to jailbreak iPhone 3G and iPod touch 2G on iOS 4.1 using Redsn0w 0.9.5 can be found here. Please read all the instructions carefully before upgrading and jailbreaking your phone on iOS 4.1.

iPhone 4, iPhone 3GS and iPod touch 3G and 2G (MC models) users will have to wait for the new all iOS device jailbreak by Comex, which is currently in testing stages and will be out as soon as all the bugs have been ironed out.