Apple today has released iTunes 9.2.1 for both Windows and Mac OS X. This is a minor release which mainly brings stability & performance improvements, along with bug fixes when taking backups and syncing all the iOS based devices. Full change log is as follows. 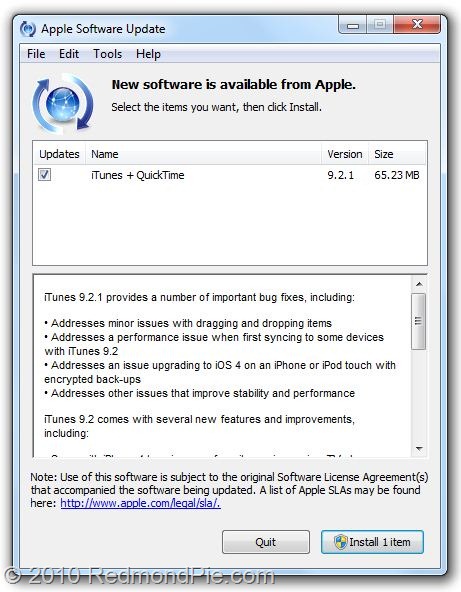 iTunes 9.2.1 provides a number of important bug fixes, including:

– Disables older versions of some incompatible third-party plug-ins
– Addresses minor issues with dragging and dropping items
– Addresses a performance issue when first syncing to some devices with iTunes 9.2
– Addresses an issue upgrading to iOS 4 on an iPhone or iPod touch with encrypted back-ups
– Addresses other issues that improve stability and performance

This new update is not available yet on Apple Software Update utility. You can grab it directly via the link given below.

Note for Jailbreakers and Unlockers: It is better NOT to update until I have tested it with my jailbroken / unlocked iPhone.

UPDATE 2: It has now been confirmed. iTunes 9.2.1 is safe for all jailbreakers and unlockers.