It’s approaching that time of the year again when the live iTunes Festival begins, this time featuring a string of well-known artists who will descend on The Roundhouse in London to entertain the masses. One of the fantastic things about the festival is that every ticket is totally free of charge and lets music lovers see performances from their favorite artists while also letting Apple heavily promote the iTunes brand that has been so influential in the music industry over the last decade.

This year’s festival spans across thirty-days and features gigs from over sixty of the world’s most popular artists, all of which will be available for those who aren’t fortunate enough to have tickets to watch live or view afterwards through one of Apple’s mobile or computer devices. As you might expect from a company like Apple who are not only at the forefront of consumer technology but also extremely influential in the music space thanks to the way they revolutionized digital downloads, the festival will be broadcasted across the world through the iTunes Festival website, through an official festival app available for the iPhone, iPod touch and iPad as well as a new live streaming experience on the Apple TV.

The big screen is obviously the most immersive way to watch this kind of content, something that can be achieved by downloading the official iTunes Festival iOS app and using AirPlay to send the content to an Apple TV unit connected to a high-definition television. Alternatively, Apple has also updated the main interface of the Apple TV units to have a limited edition iTunes Festival app that will stream all the happenings live via the powerful little set-top box. 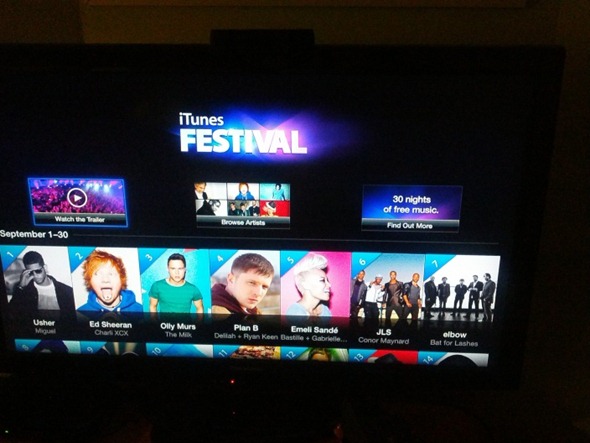 The dedicated app that has made an appearance on the Apple TV will be a limited time only offering, functional during the month of September to show the live streams of the various performances of the festival as well as hosting the content for a limited time afterwards to allow those who missed it to take a peek. Those that have an Apple TV and are interested to check out this awesome free content from Apple during next month, then check out the home screen on the unit. If the update hasn’t filtered through, then force reboot the device or manually update the software. Hopefully there will be some awesome music being streamed to go along with the expected media event on September 12th.