Microsoft’s SkyDrive cloud service has been knocking around for a while now, and having been given a native iOS app a couple of months back, it has now arrived – fashionably late as with most apps – over at the Google Play Store.

This year has certainly been significant for the cloud, and with Apple heading proceedings late last year with iCloud, both Microsoft and Google have pushed forth their own respective services to test the resolve of the domineering Dropbox.

Having used SkyDrive on iOS since it arrived, I have to say I am relatively impressed, and although one almost cannot help but use iCloud to a certain degree – at least when using two iOS devices and a Mac frequently – I would certainly have to place Microsoft as being at the higher end of the cloud scale.

With iPhone, iPad and iPod touch users (and of course, Windows Phone wielders) having already familiarized themselves with SkyDrive, Android users have had to wait their turn. Apps have a habit of turning up at the Google Play Store a great deal after they’ve flown through the App Store, and just in time for Microsoft’s upcoming product push, the Redmond company has delivered. 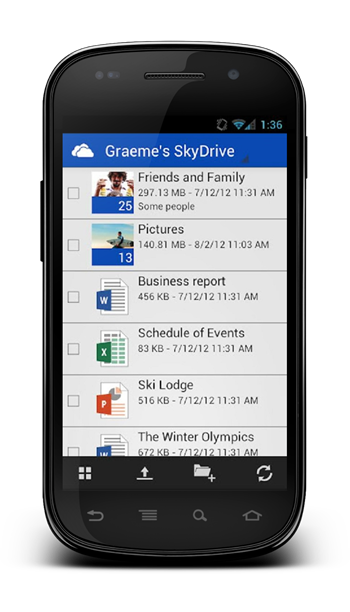 It is, as you’d expect, much the same as its iOS counterpart; allowing Android users to readily store and access folders, files and documents by logging in with a Microsoft account. As with the iOS iteration, multiple files can be uploaded, although I have found this to be a little slow at times.

For those unfamiliar with SkyDrive, it offers a reasonable 7GB of storage space as standard, which will suffice for the overwhelming majority. Microsoft offers further real-estate for those frequently uploading larger files, and prices are in line with those offered by the other major players. 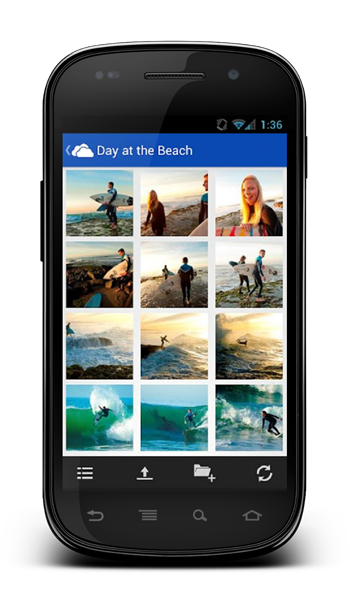 So, if you’re an Android / SkyDrive user, you may well have been waiting for this release, so head over to the Play Store (via the link below), and let us know how it runs for you by dropping a comment on our Facebook or Google+ pages.