YouTube App For Xbox 360 Receives A Much Needed Speed Boost Update, Now Up To 5x Faster

If you enjoy being sociable, catching up on trends or just generally wasting time on the web, then the past week’s releases will have been pretty useful to you. Facebook finally pulled its finger out and delivered a decent mobile app (well, at least for iOS), so your social networking can be done at light-speed, and now the new YouTube app for Xbox 360 is said to be up to five-times faster than its predecessor.

If you’ve ever caught an advertisement from internet service providers, you’ll know the "x times faster" slogans and promises don’t always – in fact, hardly ever – bear fruit, but having given it a little run-out ourselves, we’ve found that it’s now actually usable. Visually, it hasn’t changed on a grand scale, but this update isn’t full of vanity house improvements, instead focusing on usability, and the results are quite extraordinary.

Both the PlayStation 3 and Xbox 360 have been spreading their wings over the past couple of years in order to offer content beyond gaming, but the YouTube access on both has, up until very recently, left much to be desired.

The PS3’s app was updated last week – albeit with different changes – and it does seem those using Microsoft’s console have received the better hand on this occasion. If you’re an Xbox LIVE Gold customer, then your YouTube app should automatically update next time you log in. If nothing appears to be happening, navigate over to the Xbox LIVE Marketplace and download manually. 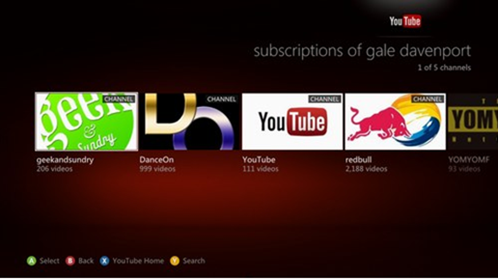 Aside from the speed enhancements, users can now also access channels with official music videos, which is one of the main reasons why millions head to the Google-owned viral video site in the first place.

YouTube is the Achilles Heel of many a productive individual, and if you find yourself losing hour upon hour watching a sneezing panda or, worse, a guy poking a hole into an iPad with a sub-machine gun, then you should most definitely fire up your Xbox right now and update. Personally, I personally prefer wasting time on Wikipedia, but hey, there’s nothing wrong with losing yourself on YouTube either – even if it can be something of a troll-fest.

Be sure to give us your opinions on the new app by leaving a comment on our Facebook or Google+ pages.