If Christmas was a competition, then Apple would be proudly displaying the trophy for Christmas 2019. A new report from Flurry Analytics shows that iPhones and iPads accounted for 43% of device activations in the United States for the period December 25th through December 31st, 2019.

Rather than children and adults waking up to toys and homeware items on Christmas morning, it seems that people are gifting far more expensive items in the forms of smartphones and tablets.

The report outlines the top devices activated in the United States for the aforementioned dates, with Apple dominating the top nine spots. The companys iPhone 11 accounted for 6.16% of those activations with 2018’s iPhone XR in the second spot with 5.27%. The other seven places were hogged by a healthy mix of old and new with consumers registered everything from the iPhone 6 Plus (2.95%) through to 2017’s first notched device, the iPhone X (2.23%).

The same report also suggests that Apple was holding a 40.6% market share for the period of December 1st through to December 24th. That market share rose to 42.8% on the week between Christmas and the New Year, suggesting that the Cupertino-based company can hold its head high as the champion of the festive period.

At least as far as smartphones go in the United States. Samsung doesn’t appear in the top ten list of activations for that period but did manage to become the second most successful device manufacturer over the Christmas period. No surprises there as Apple and Samsung continue to fight for first and second spots no matter what metric you take. 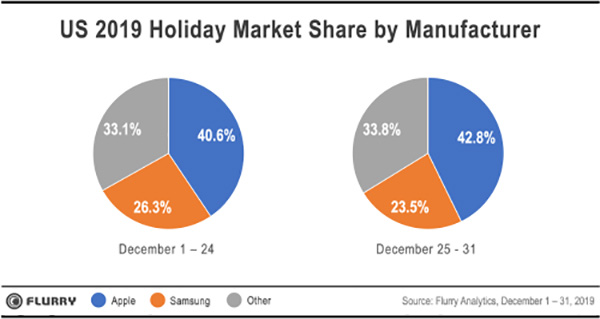 This particular report only outlines the activations of smartphones and tablets so it doesn’t go into any detail whatsoever on the demand levels for other hardware and accessories offered by some of the world’s leading technology companies. 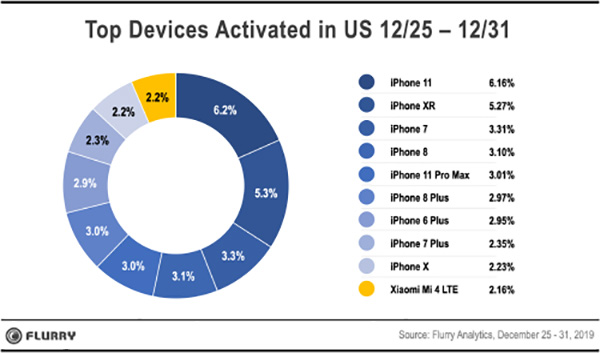 We will have to wait until we hear Apple’s official earnings call for the final quarter of 2019 but the smart money is on the demand being extremely high for AirPods and other Apple devices. Companies like Samsung are also likely to have made a killing on accessories and services as well as on more affordable and cheaper smartphones.