This Oversized iPhone Runs Windows XP on a 7-inch Screen

Here is yet another one of those crap-gadgets that are good for nothing. The Sansui P72 is an oversized iPhone clone which is powered by a 1GHz Via C7-M CPU, and backed with 1GB of DDR2 ram and 32GB SSD. It features two USB ports (take that iPad !) along with one that doubles as eSATA, a 1.3 MP webcam, Gigabit Ethernet, and a 3 hours of battery life. The 7-inch resistive touchscreen with 800 x 480 isn’t something to write home about. Oh and this Apple clone runs Microsoft Windows XP, with an iPhone OS like interface layer to go on top of it. 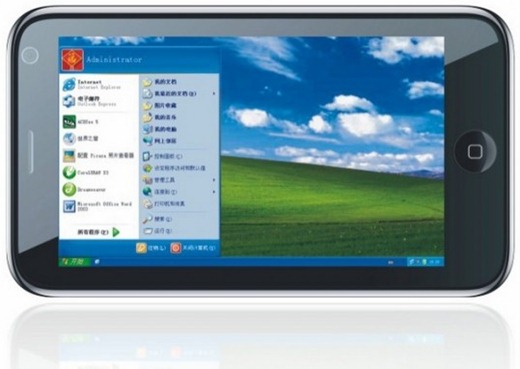 Earlier, we also reported about an iPad clone which was available in China even before Apple iPad was released in US. Same goes for the Android powered iPad clone, and the Chinese “iPhome 4G”, which is a copy of the next Apple iPhone and is now available in China for one third of the price.

Like always, we at Redmond Pie strongly discourage buying counterfeit products as it hinders the end-user experience in a bad way. While getting attracted towards these low priced products, remember that these are low quality as well. Nothing can be compared to the original thing which provides proper functionality and the experience which one would expect. Just spend those extra Dollars on an original iPhone or iPad instead, it’s worth the investment. [via CrunchGear]