On its website, Apple waxes poetic about the improvements in LTE speed offered by the iPhone 6. The fact that it, as Apple states, "has more LTE bands than any other smartphone" and "supports more advanced wireless technologies to boost performance" should, in theory, mean that it’s considerably quicker in terms of speed than the preceding iPhone 5s. Taglines and promises are one thing, and as we’ve learned only too many times, real-world performance can often be another, and so to dispel any lingering notion of doubt, you can see the iPhone 6 in a side-by-side speed test with last year’s flagship iPhone 5s below.

Embedded below is a video of the iPhone 6 and iPhone 5s going into battle, with the LTE speed test being based in London, Ontario, Canada. With both handsets running the same Fido carrier, the Ookla SpeedTest.net app was elected to gather the evidence, and as you’ll see in the clip embedded below, the iPhone 6 was considerably faster than its predecessor in each separate test. 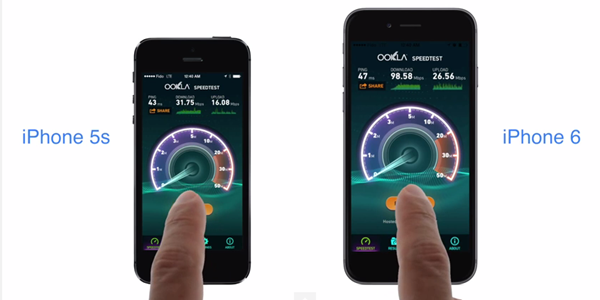 On the first run, the iPhone 6 managed a download speed of 101 Mbps and an upload speed of 25 Mbps, a significant achievement given the iPhone 5s’s comparatively meager 35/15 Mbps, and as the iClarified tests continued, the figures didn’t deviate too significantly from those initial numbers on either device.

Apple, just like any company, always makes bold claims with new product announcements, but although the reality can sometimes differ, this speed test proves that those LTE boasts were more than justified.

The accompanying report also asserts that the results, which maxed out at 111 Mbps download on the iPhone 6, would have been higher in optimal conditions. But while this test footage mightn’t have shown the very maximum that the iPhone 6’s Cat. 4 LTE radio, backed by "carrier aggregation" technology, is capable of, it does highlight the considerable bump in LTE performance versus the iPhone 5s.

At the end of the day, 35 Mbps may well be, and almost certainly is, fast enough for the vast majority of consumers. But if you want a device that really pushes the limits and offers more advanced download / connection speeds, it appears that Apple’s latest smartphone is well up to the task.