Speed Test: iPhone 6 vs iPhone 6 Plus vs Every Other iPhone Ever Released [VIDEO]

It’s all iPhone, all the time right now and understandably so. The tech world blows up whenever Apple releases a new iPhone, and with two new smartphones coming out of Cupertino this past Friday, all eyes are firmly on the iPhone 6 and iPhone 6 Plus.

With these two new iPhones being the biggest, fastest and simply the best iPhones ever, everyone wants to know just how they both stack up against the iPhones of yesteryear. We know the iPhone 6 Plus is going to be faster than the original iPhone from 2007, but by how much? 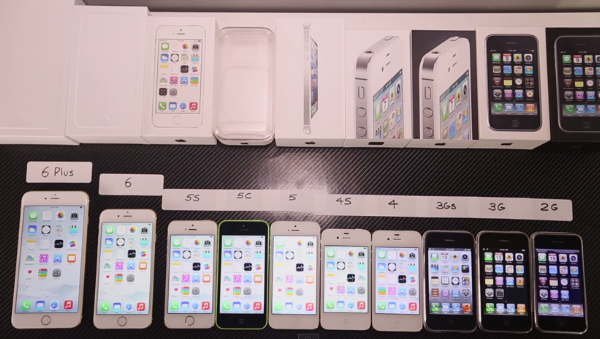 Wouldn’t it be cool if someone put that on video? Well yes, yes it would.

But you know what would be super cool? A video that takes every iPhone ever released and pits them against each other in some sort of speed-based face-off. Now that, we would like to see.

Allow us to introduce you to EverythingApplePro. A YouTube channel that just happens to have one of each iPhone that Apple has ever made, and they have done the honorable thing by taking said iPhones, lining them up, and throwing a round of speed tests at them. The end result is that, as expected, Apple’s two latest offerings are indeed quicker than their older siblings. There’s nothing particularly unexpected about that, but we have to admit that there’s something rather mesmerizing about watching all of Apple’s iPhones being put through their paces in one long line.

Call it nostalgia, call it ridiculous. We’d rather call it awesome!