The list of advertised features should be more than enough to convince even the most reluctant user that Apple’s new iPhone 6 and iPhone 6 Plus smartphones are a worthy competitor to any device on the market. With that said, if you’re one of the few still sitting on the fence, unable to make your mind up about the jumbo-sized iPhone 6 Plus, then maybe this little video will push you over the edge.

In an effort to further prove how much of an accomplishment Apple’s latest smartphone is over its predecessor, the iPhone 5s, iClarified has put together a Wi-Fi comparison test video to show just how Apple have progressed in the last twelve months – at least when it comes to Wi-Fi speed. 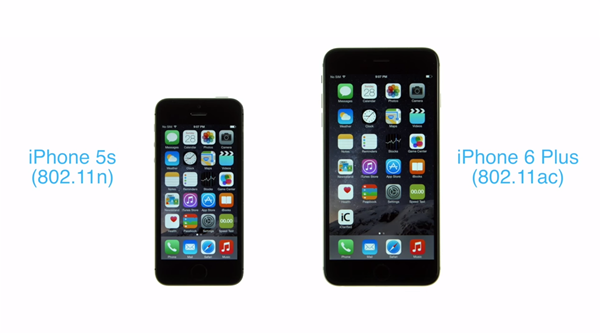 In addition to the plethora of new features and hardware upgrades, the iPhone 6 and 6 Plus ships with the 802.11ac Wi-Fi standard. Apple’s previous generation smartphone, the iPhone 5s, obviously had the ability to connect to in-range wireless networks, but did so through the 802.11n standard. It may not initially seem like a progression that would have a substantial impact on Wi-Fi performance in the real-world, but as the video shows the iPhone 6 Plus was able to chew its way through a test download at a whopping 278.5 Mbps compared to the cumbersome 101.1 Mbps achieved by last year’s hardware.

In order to keep the test as fair and accurate as possible, the website behind the video restored both devices to a clean version of iOS 8.0 and connected them to an 802.11ac compatible Apple AirPort Extreme Wi-Fi base station.

The results clearly speak for themselves. Of course, having the 802.11ac wireless networking technology in the iPhone 6 Plus doesn’t mean that all theoretical download speeds are going to be achieved by everyone using the device. Actual speeds received will vary greatly on the connected network and are often limited by the supplying Internet service provider. The change should be enough however to see some improvement if you’re used to using a 5s.

What are your thoughts on the iPhone 6 Plus? The Wi-Fi performance has clearly been improved over previous models, but what else gets the thumbs up from you?