Apple’s iPhone 6 may have enjoyed a blistering start during its first few weeks on sale, but it still faces stiff competition from other high-end handsets available across the industry, and if you’re still on the fence with regards to which device best suits you, then you’ve probably been reading a lot of specs sheets. But while a big, beefy processor should keep things running smoothly and with great fluidity, the real-world speed can only be determined by using a device to perform a multitude of day-to-day tasks, and in the most comprehensive speed comparison to date, we get to see how the iPhone 6 stands up against both the HTC One M8 and Samsung’s flagship Galaxy S5.

Both of the Android handsets pack quad-core processors, backed up by plenty of RAM (2-3GB vs iPhone 6’s 1GB), but while the iPhone 6 may seem inferior with its dual-core A8, the fact that Apple has the advantage of creating both hardware and software in-house means that it can get the very most out of every droplet of speed available. 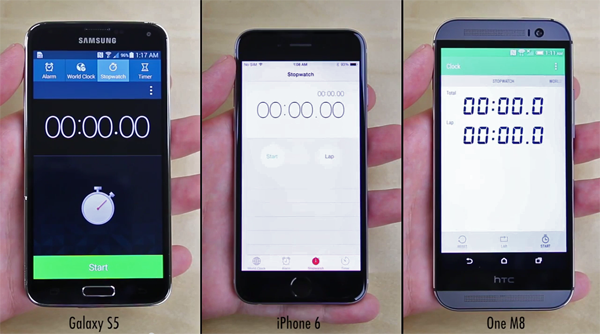 With the A8 also being a 64-bit offering, it’s vastly superior to the dual-core processor of any other smartphone one could care to name, but up against the high-performing HTC One M8 and Samsung Galaxy S5, can the iPhone 6 keep up?

The guys at PhoneBuff asked themselves the very same question, and being the raving techies that they are, decided to put their burning queries to the test.

As you’ll see in the video clip below, the iPhone 6 was a bit of a slow starter, but soon picked up the pace, and as the same apps were opened up sequentially on each device, began to establish a very comfortable lead.

The Samsung Galaxy S5 was considerably slower than the rest of the field, and despite running the same base OS and offering comparable specs to the M8, finished 50 seconds behind in PhoneBuff’s "virtual assault course." The iPhone 6 was the winner with a time of 1 minute, 55 seconds, comfortably ahead of the M8 which managed 2 minutes, 9 seconds, but with the Galaxy S5 just over one second from the 3-minute mark, it’s unquestionably the slowest of these three titans.

So, the iPhone 6 is the new speed king, but does it have your vote as the best in the business? Check the video out below, and be sure to share your comments with us via the usual channels.