Samsung versus Apple is one of the most fiercely contested battles in the mobile industry, but while these two titans of tech regularly astonish us with their products, they’re both often inclined to take matters down to an infantile, school yard level. When Apple first launched the iPhone 6 early last month, the Korean outfit was one of a host of companies to baulk at its rival’s decision to implement features that it, along with others, had been peddling for years, and with the recent Bendgate scandal – such as it is – Sammy has once again attempted to laud over its arch nemesis.

A new video rolled out by the Tizen OS maker seeks to show prospective smartphone buyers that the Galaxy Note 4 has no issues with bending when placed inside a user’s pocket. Unless you’ve been in hiding for the past fortnight, you’ll have seen the Internet’s reaction to a handful of claims that Apple’s new handsets, particularly the larger iPhone 6 Plus, were prone to bending in what was being touted as a design flaw on the part of the Cupertino giant. 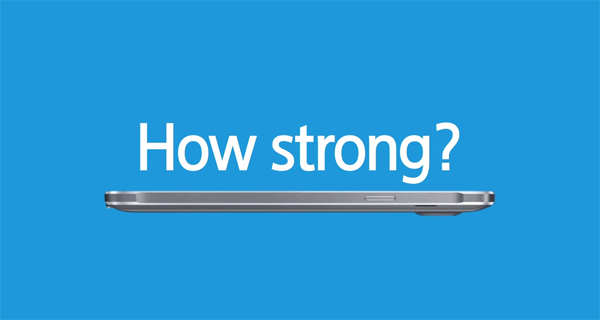 Naturally, Apple issued a statement dispelling the issue as a few isolated incidents blown out of proportion, a stance seemingly backed up by the decidedly low number of complaints made versus devices sold. But even with Bendgate now petering out, Samsung could not resist one final one-up, and via one of its many official YouTube channels, has released a new clip entitled ‘Galaxy Note 4 Endures the Gluteus Maximus’.

It starts off with a little animation before showcasing the device taking part in a number of controlled bend tests akin to those carried out by Consumer Reports recently. As you’d imagine, the Galaxy Note 4 passes with flying colors, with the two-minute clip also pointing out that the handset is indeed "strong," but in all honesty, the whole point of the clip was a thinly-veiled attempt to keep the heat on Apple.

Had Samsung managed to get the Galaxy Note 4 out last month, it would surely have made at least a slight dent in Apple’s rampant early sales numbers, but with the originator of the phablet genre only now on the cusp of launch, it will be interesting to see if, and to what degree, the iPhone 6 and 6 Plus have affected the dominance of the Note in this category.