When two different flagship smartphones are competing for attention then people will inevitably look to all avenues for ways to differenciate the two beyond the obvious design choices made by two competing companies. In a world where we spend so much time moving data around Wi-Fi connections, even with our smartphones, connection speed can either make or break a phone.

So with that in mind YouTube user Adrian Isen got a hold of an iPhone 6, iPhone 6 Plus, Galaxy S6 and Galaxy S6 Edge and put them all to the test using the popular Speedtest.net app. All four devices were connected to the same Wi-Fi connection that was in turn connected to a high-speed Internet connection. 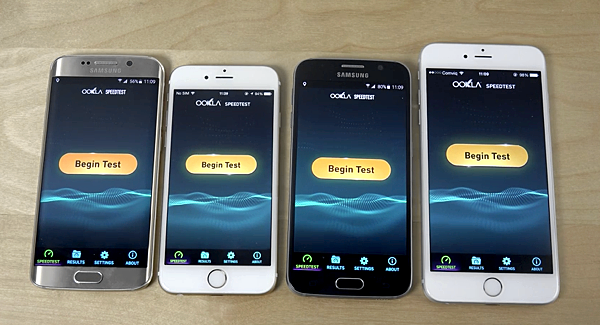 At this point it’s also worth noting the number of variables that go into such a test and reminding people that this video is far from the last word on the Wi-Fi speed capabilities of any of the phones tested. What it does do is offer anecdotal evidence that is interesting to check out, but we wouldn’t be basing our buying decision on it.

Still, it’s a cool video to just watch and enjoy.

This is not the first time that high-end smartphones have been put under the microscope in such a manner. What we really like to see now is how these four flagships will battle it out against each other in 3G and 4G LTE connectivity. Now that would be something, wouldn’t it?