It’s almost inevitable that when any of the big players in the smartphone game releases a new handset then a comparison test and accompanying video will surface somewhere on the Internet. That was the case when Samsung released the Galaxy S6, S6 Edge and it was deemed necessary to pit the device(s) against Apple’s flagship, the iPhone 6. If Samsung and Apple don’t really float your boat, and HTC is more your cup of tea, then rejoice, as a new video of a speed test has surfaced on YouTube that sees the iPhone 6, Galaxy S6 and HTC One M9 go head-to-head against each other.

The test is purely about putting the three premium devices together and seeing which one comes out on top in a straightforward test of speed and processing power. This isn’t about which device has the best design and aesthetics, or which one has the sharpest display or best integrated camera module. This is purely about grunt and which of the free flagships can perform specific tasks the quickest. It’s actually an extremely interesting comparison, considering all three phones have different technical specifications and come equipped with different chipsets. 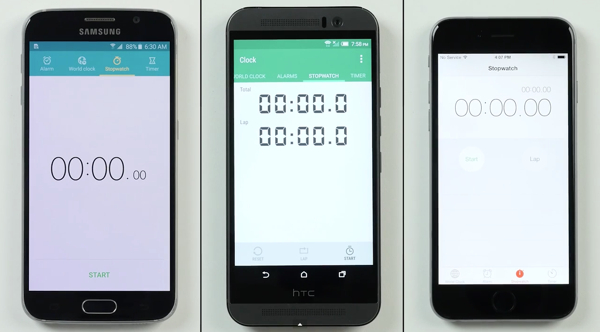 Samsung’s Galaxy S6 ships with Samsung’s own proprietary Exynos 8-core chip and 3GB RAM. The HTC One M9 is packing a more familiar Snapdragon 810 4-core chip clocked at 1.5GHz with 3GB RAM, and of course, Apple’s iPhone 6 offering relies entirely on the Cupertino company’s own Dual-Core A8 processor with 1GB RAM to attempt to separate it from the competition. Just by looking at the specs of the chips it shouldn’t come as any surprise that Samsung’s Galaxy S6 powers through tasks such as launching intensive games extremely quickly.

With that said, as devices become extremely capable, more and more users are utilizing multitasking features to quickly flick back and forth between backgrounded apps. HTC’s One M9 may not be able to immediately get the latest version of Mortal Kombat X in front of your face in milliseconds but the video shows that it’s an absolute powerhouse when it comes to efficient multitasking. As part of the virtual obstacle course, the HTC One M9 came outdone top in speed test with a total time of 1 minute 27 seconds. Apple’s iPhone 6 followed 7 seconds behind with a time of 1 minute 34 seconds with Samsung’s flagship device coming in last with a recorded course time of 1 minute 37 seconds.