Whenever a new flagship smartphone is announced the inevitable questions start to crop up about how fast it is, especially when compared with existing hardware from the competition. Now that Samsung’s Galaxy S6 and Galaxy S6 Edge are well and truly out of the bag, don’t you find yourself wondering just a little bit about how it compares with, say, an iPhone 6?

The guys at Phone Arena wondered exactly that, so while they were at Mobile World Congress in Barcelona earlier this week they decided to put together a video that shows a Galaxy S6 Edge and an iPhone 6 being put through their respective paces side-by-side. While not quite scientific and far from definitive, the tests do show both phones launching their built-in apps that cover things like contacts and photo management. 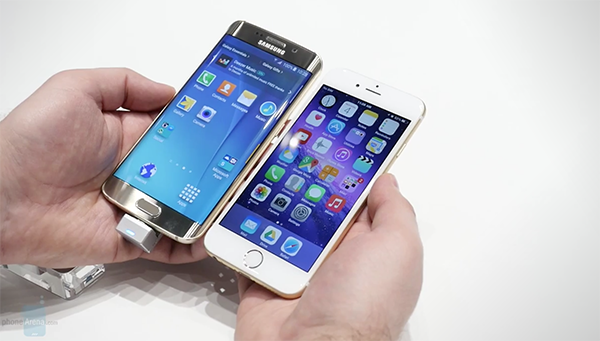 While we’re not sure there is truly enough to go on in order to make a proper judgement on how the two flagship smartphones compare, Phone Arena believes that Samsung’s Exynos 7420 beats Apple’s A8 in multi-core testing but that the Apple’s A8 wins in single-core tests but again, we think it’s hard to tell the speed difference in real life.

Whatever the results and even with Samsung’s notoriously heavy skinning of Android, we don’t expect either of the new Galaxy S6 phones to suffer when it comes to performance. The iPhone 6 and iPhone 6 Plus are already very quick handsets in their own right, and the Galaxy S6 and S6 Edge aren’t likely to be any different.

Having said, with all those pumped-up specs, shouldn’t the 2015 Galaxy phones run noticeably faster than 2014 iPhone 6?