Apple started receiving pre-orders for the newly announced iPad on March 12, with the promise to start shipping iPad and its accessories by April 3. However, in the past few days, Apple has amended some of the shipping schedules of their branded iPad accessories. The revised schedule of some of these accessories can be seen in the screenshot below. 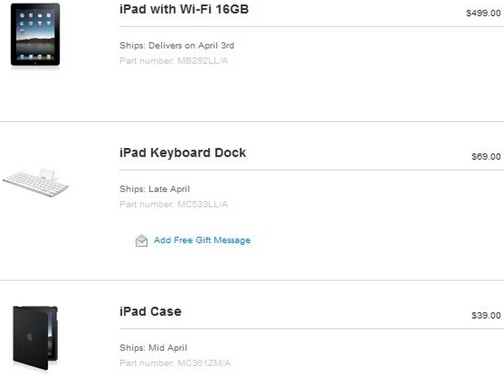 iPad Keyboard Dock, which was originally set to ship to in late-April has now been placed for shipping sometime in May. The same goes for iPad Case which will now ship in Mid-April instead of the original April 3rd date.

This is not a good omen for those outside the US who were looking to get their hands on the iPad and its accessories as soon as the first week of April, nor is it an encouraging sign for anyone in the US who hasn’t pre-ordered the product with its accessories yet.

The worse part of all is the delay of iPad Camera Connector Kit:

The kit which allows you to connect an SD card or digital cameras to your iPad is not even on Apple’s online store.  The iPad’s lack of  a standard USB port or an SD card slot built-in is a potential negative for prospective buyers, and this kit was supposed to resolve the issue.

Non delivering items on time has been a serious issue for April lately. These are not huge delays but it is a pointer towards some serious problem in Apple’s supply chain and management. We have experienced this in the recent past through the faulty 27’’ iMac saga, the slight delay of iPad, and now the non-availability of these simple in-house accessories for iPad. Apple needs to revise its marketing strategy for face saving, at least. [via 9to5Mac]