Apple’s iPhone may have dominated the headlines over the past couple of weeks, but we’re still expecting one or two more big announcements from Tim Cook’s men. The iPad 5 has been a constant topic of conversation ever since, well.. the iPad 4’s arrival toward the tail-end of last year, and with the iPad mini providing a stellar example of design and build quality, it is widely suspected that the fifth edition of the full-size model will borrow much of its aesthetic qualities from its compact cousin. New smart covers leaked to various channels seem to further corroborate this notion, and with any luck, an iPad mini-fied iPad 5 will be upon us at some point next month.

Whenever a new device hits, or is about to hit the consumer market, there’s normally a bit of a buzz created on YouTube, with consumers anxiously waiting for those all-important unboxing videos. Unbox Therapy, one of the more popular channels for unpackaging some of the latest and greatest in digital toys and their accessories, has gotten hold of some Smart Covers in numerous colors for the purported 5th-gen iPad. 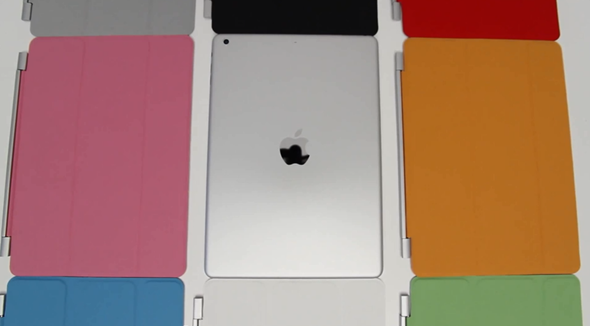 Options span gray, black, red, pink, orange, blue, white, and green, and as well as simply showing off the covers themselves, the clip also demonstrates them as they may look attached to a leaked husk of an iPad 5.

Last year’s release of the iPad 4 was as surprising as it was rushed. With Apple having only released the Retina-kitted iPad 3 in March, nobody was expecting an upgrade just seven months later, and although the innards got a customary spec-bump along with the new Lightning connector, the bulky form factor remained.

But with quite a while now sat at the drawing board, it would seem as though Apple has prepared a more worthy upgrade to its iconic tablet range, and with the iPad mini having been a bit of a marvel in the design stakes, we simply cannot wait to see the downsized iPad 5 in the flesh.

The Smart Covers are just the latest in a number of indications that the fifth iPad will look very much like a large iPad mini, and if you’ve held off purchasing an Apple tablet in recent weeks or months in anticipation for the upgrade, I have a sneaking suspicion that you won’t be disappointed.