Another new release of iOS has recently been bestowed upon us, with iOS 9.3.2 now out of beta and very much in the hands of real people. Unfortunately, those people have found more than a couple of issues when updating to the software over-the-air as Apple intended, but that’s not what we are here to talk about. 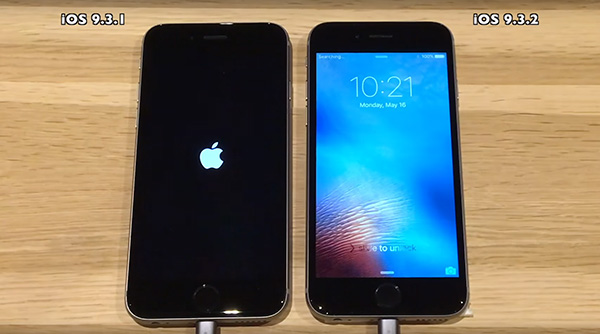 Instead, the thing that has our attention this very minute is something that we have shared with you many times before for previous iOS releases. We are, of course, talking here about a host of videos outlining just how fast iOS 9.3.2 is when compared to iOS 9.3.

Of course, if these tests are to be of any real use to anyone, the tests being carried out need to span a whole range of different devices in order to get a true feel for what everyone can come to expect from iOS 9.3.2. While those of us that have been running the beta releases of iOS 9.3.2 have often been doing so on almost-new iPhone 6s devices, it’s always interesting to see how the final shipping software fares on something a little less well endowed – an iPhone 4s, for example.

By now, we’re sure you know the drill. One YouTuber took his handy pile of iPhones and set about benchmarking them all across both iOS 9.3.1 and iOS 9.3.2 in order to try and at least get a ballpark idea as to how well the latest software to ship from Apple has been optimized.

We’re not going to spoil anything for you before you sit down and check the videos out for yourselves, but it’s safe to say that things are going in the right direction as far as performance is concerned.

In hindsight, we probably just spoilt it, didn’t we?