Apple’s recently released iOS 9.2.1 is at times noticeably faster at carrying out common tasks like opening the camera and switching between apps than its predecessors, especially on older devices. Apple’s new releases of iOS aren’t always quite so forgiving, so it’s always good to see new performance being drawn out of old hardware.

But there’s a new kid on the block in the form of iOS 9.3 beta 2, which was recently released to both developers and those on the public beta program alike. The new build is the latest to arrive with some of Apple’s newest features for the iPhone and iPad, including the much talked about Night Shift. New features are great and all, but what we really want to know is how fast those running the current betas can expect their iPhones and iPads to run once it’s installed. Has Apple managed to push on from the success of iOS 9.2.1, or has it had to dial things back? 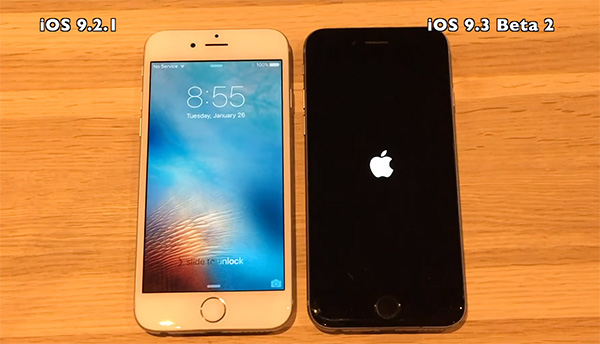 That’s a question that can only be answered by taking a host of devices and comparing their performance across a couple of different versions of iOS – in this case, iOS 9.2.1 and iOS 9.3 beta 2. The folks at iAppleBytes has done another sterling job, releasing four videos to illustrate their findings.

All four videos compare the aforementioned versions of iOS across four different pieces of hardware; iPhone 4s, iPhone 5, iPhone 5s and iPhone 6, with the results speaking for themselves. We won’t completely spoil it for you, but what we will say is to remember that this is still beta software in the case of iOS 9.3. Logging will be turned on, and things won’t be quite as optimized as they would normally be, so it’s not time to write iOS 9.3 off just yet.

You can view all four videos below.